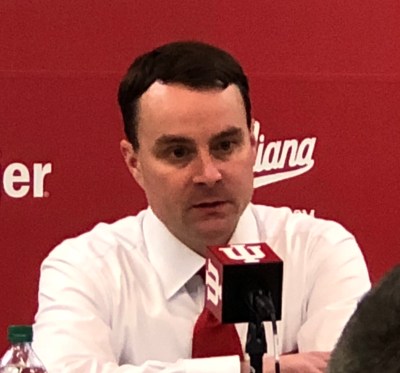 If anyone needed proof that life isn’t a movie, last night’s opening night debacle for the Archie Miller Era at Indiana stands as solid evidence.

No one other then Indiana State coach Greg Lansing would have approved the script that had the Sycamores hitting 17 of their first 22 three-pointers to win 90-69.

Miller was supposed to instill a level of simplicity on defense that would lead to tenacity, but last night his Hoosiers were anything but tenacious.

The game wasn’t as close as the 21-point difference would indicate.  In the history of Assembly Hall, no opponent has scored more than 93 points in regulation.  Indiana State got their 90th and final point with 5:01 remaining, and if they had not taken their foot off the gas that record would have been obliterated.

INDIANA STATE did that to Indiana in Miller’s first game as coach of an iconic program.

As unwatchable as the Hoosiers were on both ends of the court, the most telling moment of the night was during Miller’s postgame press conference when he said, “We’re soft. We’re just a soft team.”

Indiana was soft, and it was good that Miller both accepted and related that undeniable takeaway.  Weak coaches will rely upon analytics and a promise to watch the tape as they explain disappointing results.

Miller came with an indictment of his team’s toughness, and toughness is a hell of a lot more important than a recitation of deflection totals.

The problem for the Hoosiers was toughness, but it didn’t come from a decision not to play hard.  It was a matter of prizing execution over competition.  How a player does something is at least of equal importance to what he does.

If a player is focused on what, how loses.  And how lost last night.

Indiana’s lack of toughness is going to be fixed, and my guess is it will be fixed quickly.  That doesn’t mean IU will win the Big 10 Championship, but it does mean they will play a lot closer to their potential than fans saw last night when conference play begins.

The first step toward fixing any problem is to identify it.  It’s only the first step, but Miller immediately pinpointed it without equivocation or excuses last night.

Miller understands toughness, and if the players don’t, they soon will.

The next chapter of this season comes tomorrow night against Howard, and then the Hoosiers will get a stiff test at Seton Hall.

Every great movie shows characters whose flaws and losses are redeemed.

We’ve identified the flaw, and we’ve seen an ugly loss.  Now we await the growth that leads to redemption.

Let’s hope it comes against Howard, whoever the hell he is.