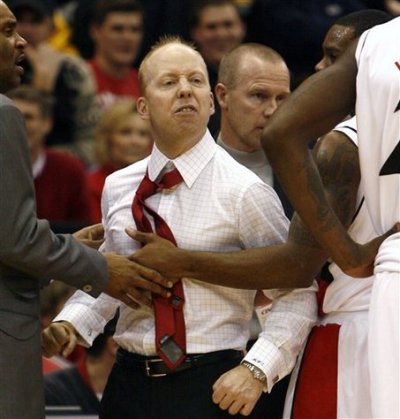 Today wasn’t Mick Cronin’s best day. This pic is from eight years ago. It’s hard to find pictures of Cronin where he doesn’t look nuts. This one is my favorite.

It’s a show, and it’s presence as a mindlessly followed tradition has consequences.

Today, it nearly resulted in a fight between Cincinnati coach Mick Cronin and a player for rival Xavier.

When I was in high school, a player from Trinity High School sucker punched one of my teammates during the postgame hand shake line.  A semi-brawl followed.

As a freshman, my son was in the the middle of a full on brawl after a basketball game at Arlington High School after an Arlington player sucker punched one his Cathedral teammates.  The father of the player who was punched had a cardiac episode as a result of the episode.

Had social media been what it is today, the season likely would have ended for both teams.

Multiply this two tame stories by 10,000, add today’s mess, and you get an idea of how mindnumpingly stupid this inane tradition is.

To force competitors to engage with one another moments after the end of heated competition is nothing more than a meaningless show with a potential consequence of a fist fight or worse.

Cronin was a total tool today.  He lost control of his emotions and went after a college student who mouthed off.  He is supposed to be an adult, a role model, an educator.  Because of the handshake line following his team’s loss today, all the supposed good of the handshake lines in all the gyms across the country has been undone.

You want good sportsmanship?  Let the players cool down for a few minutes, shower, and meet in a hallway someplace.  How about allowing what always happens anyway – the players for both teams meander around the court saying hello to family members, and they take that opportunity to say hello to friends on the other team?  Can’t that count as good sportsmanship, or does it have to happen in front of a crowd and cameras to carry weight?

By that point, they have cooled down a little bit, and they can say more than a simple, “Good game.”

To think the handshake line is a meaningful exercise worth the potential calamity narrowly missed this afternoon is foolish.

Ask players.  Ask coaches.  I have, and have found very few who believe the handshake line is anything other than an unpleasant and nonsensical pain in the ass with a huge downside.