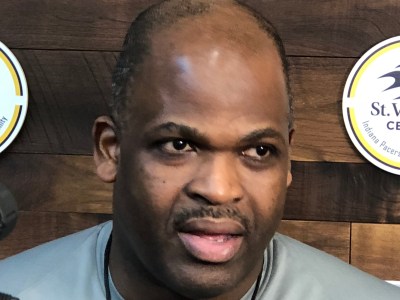 If Kevin Pritchard is successful making a deal, coach Nate McMillan might have all he needs to get to the NBA Finals.

Pacers president Kevin Pritchard will utilize cap space to execute a trade that will bring a starting small forward to the team.

I believe this because Pritchard used every media opportunity I witnessed or hosted to extoll the virtues of an uneven trade as the best path to bring improvement to a team that is now much closer to a viable NBA Finals threat when LeBron James bolted for the Lakers.

Al Jefferson being waived earlier today speaks to an urgency to free up cap space to do something soon.

Jefferson was scheduled to be paid $10M for his third season with the team, but is now due only $4M – the amount he was guaranteed.

There was no deadline to guarantee Jefferson’s deal, so Pritchard could have kept him on the roster until any point prior to the regular season and saved the same amount..

Even better, the Pacers, according to reports by those a little better at reading the fine print than I, can spread the $4M over the next three seasons, so the Pacers can recoup another $2.7M this season if they need to.

We won’t find out specifically what Pritchard is doing until Friday at 12p at the earliest.  That’s when the moratorium on free agency and trades ends.  Trades can be consummated and contracts can be signed then.

Here’s what we know today – Lance is gone.  Joe Young is gone.  Al is gone.  Doug McDermott will be a Pacer.

That’s not enough to get to the top of the East.

At guards, the Pacers have one of the most efficient point guards in the NBA in Darren Collison and all-star Victor Oladipo.  Pritchard won’t likely upgrade there.

At the four and five, Thad Young is back along with Domas Sabonis and Myles Turner.  No upgrades there, and if T.J. Leaf can be an average defender at the four, they are is good shape next year too.

That leaves the three.  McDermott is a backup.  That leaves Bogdanovic as the offending member who needs to be replaced, dealt, or upgraded over the top of.

Who comes and who goes?  Who knows?  What we do know is that if the Pacers are going to play in the NBA Finals, a more versatile small forward is necessary.

My guess is the Pacers will have one before Dave Matthews wraps his second show this weekend in Noblesville.