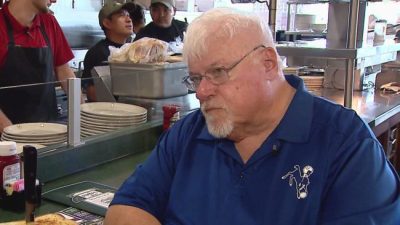 Bob Lamey should be the next to have his name lifted into the Colts Ring of Honor.

When it’s time, it’s time, and it appears Bob Lamey figured that out the day before he was scheduled to lend his estimable passion to another Indianapolis Colts radio broadcast.

Matt Taylor will take over on the radio (hopefully on a permanent basis) while Greg Rakestraw will take Matt’s spot on TV broadcasts for the final two preseason games.  Tomorrow night’s game will be on national TV, so there will be no local telecast.

Bob will be remembered for his wildly enthusiastic Colts calls.  There was never any question where Bob’s loyalty lied, and that’s why fans will always love him.

As with most broadcasters who breathe life into live sporting events for over 30 years, Bob authored some memorable gaffes, but those just made Bob more human to listeners.

The timing of Bob’s decision to retire is peculiar.  He was at practice yesterday, seated as usual in his golf cart as the Colts and Baltimore Ravens worked and fought together on the final day of training camp.  It seems odd that Bob would suddenly drive that cart into the sunset 30-some hours before kickoff.

But let’s take the word of the Colts and Bob as we remember the remarkable career of a man who was known as “Hockey Bob” before the Colts moved to Indy and asked Bob to become storyteller for 31 of their 34 seasons here.

One of the key traits of a radio talent is authenticity, and anyone who thought Bob’s hysteria in the booth was an act have never spent time with him.

As someone who worked with Bob for five years when he was the sports director at WIBC, I can tell you meetings with him were similar to listening to him call games.  He was irascible, passionate, and prone to more than occasional outbursts.

It wasn’t Bob’s job to be a million laughs in the office.  He was there to make sure every broadcast he touched was as good as it could be, and he didn’t tolerate what he perceived to be mediocre.

One of my favorite Bob stories is from Pole Day of the 1995 Indy 500.  Bob was anchoring the WIBC portion of the day’s action, and our boss, program director Bobby Hatfield was in the booth.  The audio levels were not to Hatfield’s liking, so he reached over Bob’s shoulder and began adjusting the board.

This did not please Bob, who snapped around and glared at Hatfield in a way that instantly communicated his angry dissatisfaction.  “My sports director almost ripped my head off!” Hatfield howled with a laugh a few minutes later.

I asked whether he took a second crack at getting the levels to his liking, and Hatfield responded, “I would rather have imperfect audio than a broken nose.”

There are a million similar Bob stories, but anyone who is surprised by that never listened to him rail against a referee who jobbed the Colts.

An era in Indianapolis broadcasting ended today, and a job is finally open in a state where radio play-by-play positions churn slower that the United States Supreme Court.  Among Don Fischer (IU Football and Basketball), Larry Clisby (Purdue Basketball), Howard Kellman (Indianapolis Indians), Mark Boyle (Indiana Pacers), and Bob Lamey, Boyle has been the new kid on the block since 1988!

At a time when play-by-play artists are coached toward passionless mistake-free mediocrity, Bob Lamey was an original, a fan, and a Colt.

We wouldn’t have wanted it any other way.

Updated August 22, 2018 – 9:38 am – Obviously, this post was written prior to our learning what caused his forced retirement.  Given his choice of language, it is good that he is gone.  The n-word has no place in our society, and those who use it – even in jest – have no place on our radios.

One thought on “Voice of the Colts Bob Lamey retires – his passion, anger, joy, and voice will be missed”