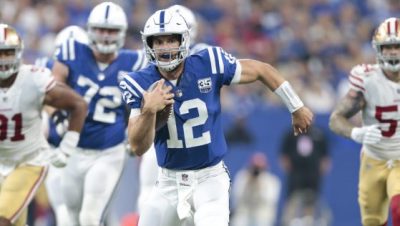 When Colts fans see Andrew Luck do this, they scream “NOOOOO!”

After spending more than a year rehabilitating his surgically repaired shoulder so he could play again, Luck continues to put his physical health at risk by extending inconsequential plays – and trying to win all of them.

As a result of a tackle which ended one of those runs, Luck hurt his foot and was held out of practice yesterday.  Colts coach Frank Reich told us yesterday that Luck would play if they had a game this Sunday.

What the hell is the matter with this very smart man?  Why would he put himself – and the prospects of the team he leads – in peril to gain a few yards on a play in a game that will never be remembered prior to the start of the regular season.

It’s like every play for Luck is a physical and intellectual exercise that must be won, and he is powerless to see football in any other way.  The potential danger is part of the thrill of competition, but as Falstaff said in Shakespeare’s King Henry IV (Part One), “Discretion is the better part of valor. Caution is preferable to rash bravery.”

Colts fans know their team can’t win without Luck, but football is about more than simple wins and losses for Luck.

The result of fighting for every yard and extending every play beyond the abilities of lesser men, Luck will likely find himself injured again and again, and his ability to play the game he loves will be corrupted.

That’s his choice.  In Luck’s world, there is one way to play, and as thrilling/frustrating as it is, fans need to respect his decision to battle for every yard and take every snap as though it may be his last.

Every quarterback will take a final snap, and it is Luck’s decision to treat each one he takes before the last as an opportunity for football perfection.

Luck is earnest, joyful, and tough as hell.  We should enjoy his presence with the Colts for as long rather than fear his almost inevitable demise.