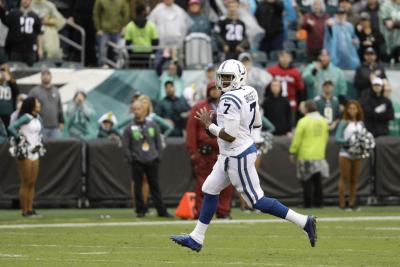 Down four points on the Eagles 46 with five seconds left, Indianapolis Colts head coach Frank Reich sent back-up quarterback Jacoby Brissett into the game to throw a Hail Mary.  He did it because Brissett has a stronger arm than Andrew Luck.

Hail Marys are best delivered to the back of the end zone.  If thrown from the Eagles 40-45 to the end line, the football needed to travel 65-70 yards.  Brissett is capable of throwing the ball that far.  Luck is not.

Immediately after the game, there was a flurry of tweets questioning the move – as though the intent wasn’t obvious and the rationale sound.  Brissett can throw it 70 yards.  Luck cannot.

No conspiracy.  No insult.  No secret.  Brissett’s arm is stronger than Luck’s, and his insertion into the game gave the Colts the best chance to win, given the situation.

In the postgame press conference, Luck said, “Jacoby has a stronger arm than I do. That is sort of what I see in practice and obviously Coach Reich [Colts Head Coach Frank Reich] thinks that as well. I’ll keep working on getting my arm where it can hit an 80-yard throw. I think there were no problems with that decision.”

Simple.  No conspiracy.  No insult.  No secret.

Let’s move on to the five penalties the Colts committed on the Eagles game-winning 17-play drive.  Sloppy on the road gets you beat in the NFL.  That’s where this game was lost – not because of what all agree was the right decision with :05 left.