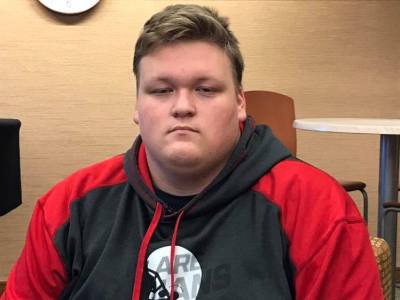 Fred Lyons is the Center Grove student who is in the center of this storm. He’ll tell his side of the story tonight on WTHR-TV.

I’ve been the idiot.  I know what it’s like to be THAT guy.  It isn’t pleasant.

As a high school junior and senior, I erred on the side of being obnoxious.  It seemed fun – until it wasn’t.

When teachers I never had any contact with became outspoken about my behavior in classes I didn’t take, it caught me a little off guard.  Between classes, friends would laugh as they told me about their harangues.  I laughed too at first.

Then I started to think about why these people I never met had such strong feelings about me and my occasional dalliances with hilarious pranks and assorted mischief.

I never caused anyone physical harm, and was never cruel – at least in my world – but I pinballed through high school as the star in my own personal sitcom.  Every idle moment, and there were plenty of those, brought opportunities to make myself laugh.

As an example, while roaming the halls on the third floor of New Albany High School during an open sixth period, I saw Rusty and Chris walk into the bathroom to change clothes for baseball tryouts.  There was a palette of folding chairs across from the restroom door, and I saw an opportunity for fun.  I stacked 15 chairs three high against the door in a way that the slightest pressure would cause them to crash to the floor, and waited around the corner for Rusty and Chris to emerge.

When they did, the doors exploded against the floor with a deafening bang.  Six teachers simultaneous flew from their classrooms to see what the noise was.  They assumed that Rusty and Chris had been fighting, and it took these best friends 10 minutes to explain they had no role in the racket.

No audience, and no laughter – except for my own.  Just a bored idiot doing what bored idiots do.

I bring this up to let you know that I have been there/done that when it comes to high school “look at me” buffoonery.  That story about Rusty and Chris is one of dozens with a similar theme and a variety of audience sizes from none to hundreds.

And so, when disincentives are discussed for the Center Grove student who flopped and wriggled on the floor as Cathedral’s James Franklin Jr., who happens to be epileptic, shot free throws, I know from whence I speak.

That kid is facing scrutiny that is almost unbearable.  He is praying for an end to the days when radio hosts and social media types talk and write about him.  To him, their judgment seems unreasonable and is born of ignorance, regardless of what they say.

The consequence he is enduring today is enough to dissuade him from further dopey acts that draw attention to him.  He is very likely embracing being one of the crowd.

But that isn’t the point of Center Grove High School making an example of him.  The rationale of bringing official school sanctioned unpleasantness into his life is to dissuade others who might be tempted to perpetrate dopey buffoonery.

This is about the perception of accountability.  This is about penalizing this kid so others won’t follow in his footsteps.  Being a student should be a privilege, not a right.

I’ll leave the specifics of the consequence to the big brains at Center Grove Schools (I’ve moderated a bit about this over the last 24 hours), but it must be strong enough to serve as a disincentive to those who otherwise don’t view opposing student-athletes as human beings worthy of respect.

This is a moment for the adults to act like adults and teach their students accountability.  Not the kid who offended a city – but those who might follow in his footsteps.