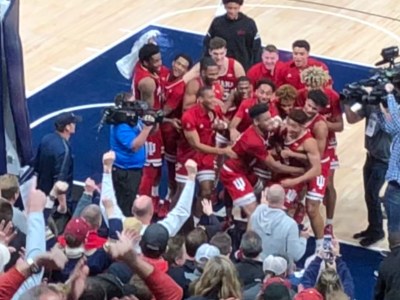 If Archie Miller wants more celebrations like this, he needs to recruit to a well defined culture.

It’s so tempting to bring in the #22 ranked player in a class – a kid who is seven inches longer than he is tall, has a 46-inch vertical jump, and has limitless shooting range – but if he is only interested in NBA mock drafts and the millions that he and his family believe await him in a year, you’re screwed.

Better to build to a culture of hard work and grit than to roll out the red carpet for a self-immersed teenager who buys into his hype.

Indiana University is blessed with unique atmosphere and amenities, and so its basketball program can recruit talent at a level many programs can’t.  Other programs – like Purdue and Butler – develop an advantage by narrowing their scope to other criteria like toughness and competitive drive.

They embrace a culture, and their basketball programs deliver a consistent result.  When coaches from Purdue and Butler walk into a summer basketball event, everyone knows what they are looking for – tough, smart players who dive for loose balls and defend with tenacity every possession.  They care about winning.

When Indiana walks in, it’s different.  And to be clear, that might be changing under Archie Miller, who has had only one recruiting class so far.  But with Tom Crean as the coach, Indiana’s cultural compass spun wildly from year to year and so did its results.

Noah Vonleh, Hanner Mosquera-Perea, Jeremy Hollowell, Troy Williams, Stanford Robinson, and others wanted wealth, not winning.  They believed real work was for walk-ons, so IU won two regular season Big 10 titles, but also finished .500 or less in the conference during the other four seasons from 2013-2018.

Fans have become outraged during the current four-game losing streak by a lack of work ethic – a possession by possession aversion to hustle.  And they are right to be angry.

Indiana still has 13 games remaining in this wobbly regular season, so the opportunity still exists for these neophytes to dig their way out of this hole.  Adversity is an excellent teacher, and the Hoosiers have been served a generous amount of adversity over the past couple of weeks.

The answer for longterm success at Indiana lies in defining a specific culture and recruiting to it.  If Archie continues the IU tradition of being dazzled by athleticism and physical gifts, Indiana will continue to languish in mediocrity with occasional peaks at excellence.

IU is much better served by recruiting the most talented four-year gritty players than those great talents who use college as a way station tolerated prior to a jump to the NBA.

Decide who you are, and recruit to those qualities.