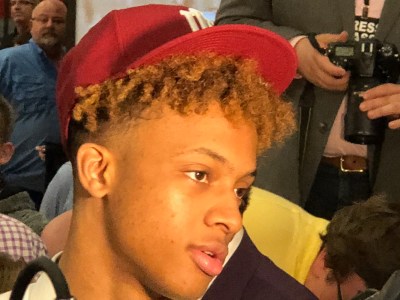 Can you believe the day Romeo Langford committed to IU was less than a year ago?

Don’t take offense to the headline – I’m right there with you!

Every year, we invest in the believe that this will be the year the glory of ol’ IU returns to Assembly Hall.  Every year, we shake our heads in dismay.  Wash, rinse, repeat.

This year, hope seemed reasonable because it’s Archie Miller’s second year (experts say it takes two years to learn to play pack line defense), the highest ranked recruit in over a decade came to Bloomington, a sharpshooter grad transfer from Cali was going to knock down threes and stretch defenses, and Justin Smith’s vertical improved by nine inches!

Look out Big 10!  Look out Final Four!  Hell, if Loyola could get there from Rogers Park, how hard could it be for Indiana to make it from Bloomington?

Last night, I hit a new low.  After a loss to Northwestern, I felt optimistic because the Hoosiers played hard, and were once seen smiling as though they enjoyed playing the game together.

There was a time when losing to Northwestern was unthinkable.  Now I take solace because players showed effort and offered evidence of joy.

These are facts about Indiana Basketball – not theories or beliefs, but facts:

And yet, somehow, we continue to delude ourselves into buying into the “Brighter Days Ahead” theory.

Next year, we’ll find reasons for hope in the arrival of Trayce Jackson-Davis and – maybe – Keion Brooks.  We will declare the one-year NBA apprenticeship of Romeo Langford to be a failed experiment (through no fault of his own), and the return to health of Jerome Hunter and Race Thompson as game changers.

The likely truth is that Indiana Basketball is what it is.  Players and coaches will come and go, and we will continue to invest hope because that is how human beings are wired.

Next time we buy a scratch off lottery ticket, we will briefly dream of wealth.  Next time we watch Indiana, we will dream of effort, execution, and occasionally accurate shooting.

5 thoughts on “Indiana University Basketball fans are insane, and there is apparently no cure! #iubb”