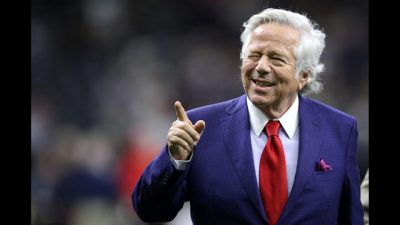 Watching an arrogant mope like Bob Kraft tumble is fun – until you learn he’s fallen on victims of human trafficking.

It’s easy to make fun of New England Patriots owner Robert Kraft and the charges that he was physically serviced twice in 17 hours on January 19th and 20th at the Orchids of Asia Day Spa in Jupiter, Florida.

That the second visit took 15 minutes from the time he walked in the door to the moment he exited is funny.  Kraft seems to treat his need for physical pleasure like most of us use a gas station tire pump – stick some money in the machine, and try to take care of business before the buzzer sounds.

What deflates the comedy is the report that many of the “orchids” at the “spa” are victims of human trafficking, and it’s impossible to believe Kraft didn’t at least suspect it.

The irksome reality of prostitution is that if the physical congress was enjoyable, compensation would not be required.

It’s easy to look at prostitution as a victimless crime, but when the “orchids” are held captive, it’s no longer entrepreneurially minded women willing to service old rich guys who have a quarter hour to kill before hopping on their private jet to the AFC Championship Game.  It’s caged human beings being forced to debase themselves for the monetary gain of their captors.

Laughing at Kraft is good sport – it’s always enjoyable to see the arrogant as idiots capable of the same boobery as the rest of us – but sexual slavery is not funny.  The people who enjoy their services are as morally corrupt as those who employ them.

Kraft deserves whatever mockery comes his way, but as a man who helped support human trafficking through his very brief visits to the Orchids of Asia Day Spa, he deserves much more.