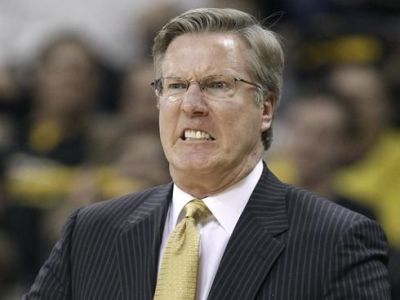 Fran McCaffery is prone to bouts of explosive rage, and last night’s was profane and embarrassing.

According to a report in the Toledo Blade, after Iowa’s 90-70 loss at Ohio State, McCaffery followed referee Steve McJunkins down a hallway and screamed,  “You cheating m—-rf—-r! You’re a f–k–g disgrace!”

Sadly, the disgrace is McCaffery.

I’ve always found McCaffery to be an interesting guy – a good coach whose abilities are overshadowed by his outrageous and red-faced hissy fits.  I’ve asked coaches who’ve known McCaffery for a long time about him, and he is almost universally liked and respected.

He recruits the hell out of Iowa, and wins Big 10 games with those kids.  That isn’t easy.  From a recruiting standpoint, Iowa is not exactly Indiana.

Over his almost nine seasons in Iowa City, McCaffery’s teams are 78-82 in the Big 10.  No disgrace in that at Iowa.  He’s a good coach.

But given his incendiary behavior, I would never trust him to shepherd my son through the end of his adolescence into early adulthood.

Student-athletes deserve more than a guy who knows where to pout the Xs and Os on a dry erase board.  There should also be a mandate that a coach serve as a mentor for his players, and McCaffery is as likely to break a dry erase board as draw a play on one.

He berates players, officials, broadcasters, and official scorers with a troubling ire – the kind of ill-tempered ranting that is unacceptable in virtually every other profession.

Why coaches are rewarded for insanity while most others in society are fired is unexplainable.  Bosses who treat employees and officials as McCaffery does would rightly be led from their offices in shackles.

It’s absurd that an educator at a state university would be allowed to continue his reign of public belligerence and bellicosity without someone stepping up to help McCaffery deal with his anger disorder.

I’m not advocating McCaffery be fired, but it would be in the best interest of the university, student-athletes, and McCaffery himself if a round of treatment for anger management was required.

There is a time and place for anger and profanity.  I enjoy occasional dalliances with both, but as a relentlessly deployed indulgence, it’s bad management and an even worse example for his student-athletes.

It’s time for basketball coaches to behave like the managers who will one day employ student-athletes – most of whom will never play in the NBA.

That should start with one of college basketball’s most egregious offenders.

Iowa athletic director Gary Barta needs to risk incurring McCaffery’s wrath by demanding he curb his instinct to indulge in it.

Here is the announcement released this afternoon by the Big 10 in response to McCaffery’s tirade last night:

ROSEMONT, Ill. – The Big Ten office issued a public reprimand of Iowa men’s basketball head coach Fran McCaffery for violating the Big Ten Sportsmanship Policy following Iowa’s game against Ohio State on Feb. 26. The Big Ten supports the University of Iowa’s suspension of Coach McCaffery announced on Wednesday. In addition, the conference announced that the institution has been fined $10,000 as a result of the violation.

The Big Ten determined that McCaffery’s postgame actions were in violation of Big Ten Conference Agreement 10.01, which states in part that “The Big Ten Conference expects all contests involving a member institution to be conducted without compromise to any fundamental element of sportsmanship. Such fundamental elements include integrity of the competition, civility toward all, and respect, particularly toward opponents and officials.”

The Big Ten Conference considers this matter concluded and will have no further comment.