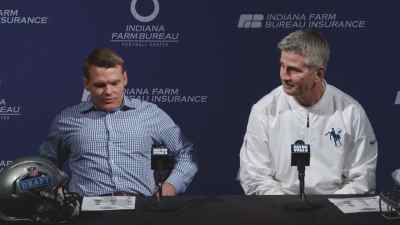 Who could have guessed this accidental pairing would be so perfect?

The Colts front office and coaching staff are boring.  Fans should love it.

Sure, it would be more fun to write and talk about a team in total disarray with a rampaging buffoon clumsily running the show.  Arguing with people bad at running sports franchises is fun for the media.  This is not that.

General manager Chris Ballard and coach Frank Reich seem to be really good at their jobs, and very honest and consistent in their messaging.

Each spoke to the media yesterday, and not surprisingly said the same things they always say.  It’s boring, and it works.

“…the vision – sitting down and talking with Chris (Ballard) at the beginning about the kind of players that we wanted to get. Obviously, talented players but the kind of players with the character, with the football IQ, with the toughness, guys who love to practice, guys who just love being around the game and we have a lot of those guys in the locker room. Guys who respect each other, guys that we can build trust with, that are trustworthy, guys that fight to get better all the time, we got a load of those guys in the locker room.”

“It’s been a good evaluation period for all of us. I talked a lot about how we reset and we go through a thorough evaluation of everything we do – scouting, coaching, medical, strength, player evaluations. We go through them ad nauseam and we try to figure out where we are going to get an edge, where do we need to get better, what do we need to do to continue to take our program to another step? I think we have come up with some good solutions. We are going to make some tweaks to our program internally, but our mission will never change. We will just continue to push to get better each and every day. That’s our mantra.”

By the way – top was Reich and bottom was Ballard, if you hadn’t figured that out.

Now, it’s not enough to say those things – your daily work must reflect that philosophy of daily effort toward improvement.  And you need players – good players.  Culture without talent will get a GM and coach fired just as quickly as talent without culture.

The Colts raised their level of talent exponentially last season with a stupendous draft (Quenton Nelson and Darius Leonard as easy examples – the first rookie tandem from the same team to be named first team All-Pro since Dick Butkus and Gale Sayers with the Bears in 1965), prudent  signings of effective free agents, and determined work toward internal improvement.

It would be so much more fun this time of year to be in Cleveland, Detroit, or Cincinnati, where the prospects are dim, but the anger always entertaining.  Come September, the excitement should be on the field for the Colts.