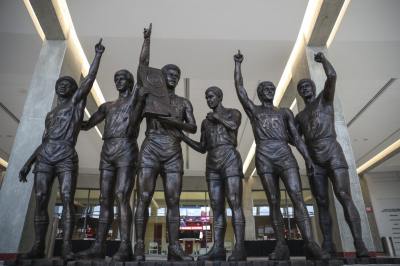 In the statue at Assembly Hall celebrating the undefeated National Championship team from 1976, Bob Knight is missing because he asked not to be included.

Bob Knight is not well.

Stories have circulated for a couple of years about Knights’ health, and I’m sure you have heard them.

Legendary IU play-by-play voice Don Fischer went on a radio show in Michigan and declined to answer a question about Knight and his former employer mending fences because of Knight’s health.  Fischer was vague, which is appropriate.

Those who listened to Fischer reported it as confirmation of Knight’s worsening condition without engaging in speculation as to what’s going on.  Nothing wrong with that either.

What afflicts Knight is his business, and if he wants to share, that’s fine.  If not, that’s fine too.

For now, we hope that he’s comfortable and as happy as possible, whatever the diagnosis and prognosis.

Posts about Knight’s health have excited another batch of conversations about his legacy.  They seem to crop up every year or so.  Last year, we watched the ESPN 30 for 30 “The Last Days of Knight,” and yammered for a week about whether Knight should come back to IU.

The self-congratulatory film had several gaping holes which rendered it incomplete.  As a titillating look at the cause of the rift between Indiana University and Knight, it mostly regurgitated what had already been served, chewed, and digested many times.

So the question as to whether a statue of Knight should stand forever at IU has been asked by Dan Dakich, who played and worked for him for 17 years.

At the time I write this, 8,268 people have voted, and 79% favor a statue dedicated to 29 years of coaching a team that graduated damn near everyone, never cheated, and won three National Championships.

But there is only one vote that matters, and that belongs to Knight.

To this point, Knight has been resolute in not allowing his image to be used to celebrate great moments in the commemorations that are everywhere in Simon Skjodt Assembly Hall.

This is Knight’s call.  Indiana jumping on the statue for Knight bandwagon over the top of his previous litany of protests would be brazen and wrongheaded, not that IU officials have never wandered into that territory before.

It’s to AD Fred Glass’s credit that Knight was not immortalized in those pieces already created, and hopefully that respect for Knight’s wishes continues to drive policy in Bloomington.

Almost 19 years after Knight was fired, he remains the most discussed and debated figure in Indiana (the state, not the university) sports and life.

Everyone has an opinion.  Most are uneducated.

Good Knight, bad Knight, whatever – Bob Knight is the most iconic and important figure in IU history.  He is uniquely responsible for IU’s continued position of basketball prominence despite nearly relentless mediocrity over the last quarter century.

He was as publicly imperfect as any public figure in sports history since Ty Cobb, but in terms of the kind of lasting impact that needs to be immortalized, Knight is undeniably that level of icon.

Has Bob Knight done what’s necessary to earn a statue?  Of course, without doubt or debate.

Should IU erect one?  Unless Knight signs off – never.

One thought on “Statue of Knight at IU? Specific news about Knight’s health? Only if Knight wants it”