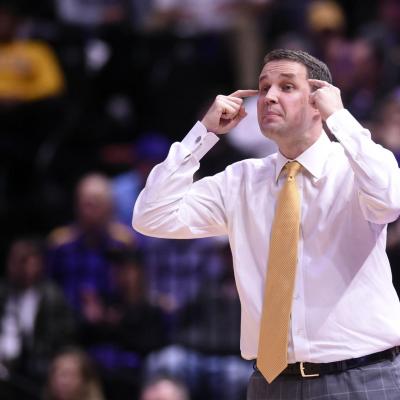 Will Wade should have used his head. Almost seems like he wanted to get caught.

LSU basketball coach Will Wade was suspended indefinitely following a report by Yahoo Sports that including damning quotes from Wade about what can presume are financial negotiations with a recruit’s handler.

The quotes came during a phone conversation between Wade and Adidas rep Christian Dawkins that was recorded by the feds during an investigation into college basketball corruption.

Here are some damning pieces of that conversation:

“It was a [expletive] hell of a [expletive] offer. Hell of an offer. … Especially for a kid who is going to be a two- or three-year kid.”

There you go.  Anyone who reads that as something other than a coach who offered cash in exchange for the basketball services of recruit Javonte Smart is missing the portion of his brain that grasps corruption.

Smart is now a freshman averaging 11.5 points per game for the #10 Tigers.  Apparently, Wade won the auction.

It’s true that Wade is not the only college basketball coach of a program where recruits, family members, and/or handlers are compensated.  There are plenty of those.  The eco-system of college basketball has long rewarded excellence – as does virtually every other industry.

Because of NCAA rules, the payments are usually brokered and paid by third or fourth parties who orbit outside the reach of the enforcement staff.

Most coaches are clever enough to distance themselves from direct knowledge of any payments – much less brokering the deal themselves.

Wade was arrogant.  The wiretap appears to reveal he did the deal himself.

LSU correctly views him as an asset too stupid to save, so he was suspended until the administrators can gather their own evidence – or verify what is in the Yahoo report – which has been made more difficult with Wade’s reported refusal to talk to his bosses.

The NCAA is not the villain in college basketball – it’s coaches too damn dumb to execute the corruption necessary for the free flow of compensation to recruits without detection.

Cash always follows value – and it will always be so in college basketball.  As long as fans buy the idiotic lie of amateurism, the NCAA isn’t forced to deal with clumsy oaf coaches, and families get some walking around money, everything will be fine.