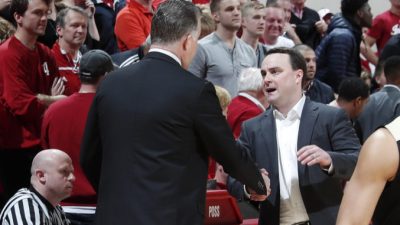 Matt Painter has already learned the lesson Archie Miller may need to fully embrace. Fans definitely need to climb on board.

Indiana Basketball does not need to figure out how to compete with Duke and Kentucky – it needs to find a way to catch up with Purdue.

For an Indiana guy, that was hard to write, but it’s true.

Do I really need to drudge through IU’s recent past – and not so recent past – to paint a picture of how this former blue blood is not even a gold and black blood anymore?  Alright.  In the spirit of being complete, here you go.

IU is 48-44 during that five-year stretch with two NCAA Tournament bids.

Purdue’s success came because Matt Painter figured out that culture is a big deal.  He pivoted a bit toward additional athleticism and length in 2012, and the result was disastrous.  When he returned to a recruiting filter that valued toughness, the Boilers bounced back.

Indiana has been struck in a purgatory of recruiting the most talented players – rather than finding “Indiana” players.  When you walk into a summer tournament, you see kids who look like fits at Duke, Kentucky, Butler, Michigan State, Purdue, and many other programs that have adopted a specific culture.

I’ve been to dozens of these events, and I have never looked at a player and thought, “Now there is a Hoosier!”  Indiana needs to get there, and fans need to embrace it.

Five-star players are not always the key to success.  Michigan under John Beilein has enrolled exactly one five-star recruit in the last 10 classes – Glenn Robinson.  All they have done is win.  Well, except for an 8-10 Big 10 record in 2014-2015, but the Wolverines have played in two National Championship games over the last six tourneys.

Beilein’s average ranking for his last 10 recruiting classes is 36th.

Conversely, Indiana’s recruiting classes have an average ranking of #27, and Tom Crean and Archie Miller have combined to land seven five-star recruits.

Let’s go back to Purdue for a second.  Painter has landed one recruit ranking in the top 60 of his class during the last 10 classes (five-star Caleb Swanigan).  Several years Painter didn’t get a bite from anyone in the top 100.

The point of all this is for fans to take a deep breath about the commitments of five-star recruits like Keion Brooks.  Twitter was filled with angst Friday night when Brooks announced he was headed to Kentucky instead of Indiana.

I’m not saying that avoiding five-star level guys is a strategy for success – just that acquiring them does not put Indiana – or anyone else – on a sure path for success.

When will Indiana fans learn the lesson that talent isn’t enough?  And when will the culture Miller is trying to develop show itself on Branch McCracken Court at Simon Skjodt Assembly Hall?

Painter figured that out six years ago, and the sad truth is that Indiana longs to be where the Boilermakers are today.