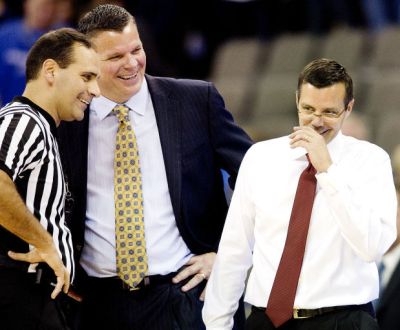 Tim Miles is out at Nebraska.

Don’t feel sorry for him, because he’s not feeling sorry for himself.  Like he said on a podcast a couple of weeks ago, “”If they fire me, they’re still going to pay me. I’m still a millionaire, so I’ve got that going for me.”

That’s a great outlook.  Universities and fans always want coaches to say they would do the job for free while paying them millions.  It’s one of the many hypocrisies of collegiate athletics.

Miles only mistake was apologizing for making the comment.  Like his two predecessors, he had to go because Nebraska needs to sell a vision of hope even when none should logically exist.

Barry Collier coached the Cornhuskers from 2000-2006, and Doc Sadler followed from 2006-2012.  Both achieved similar results to Miles, which leads a rational person to believe the coach is not the issue.

The prime reason behind the entrenched mediocrity at Nebraska is a lack of high school talent in a state known as a basketball wasteland.  Since 2012 – the year Miles was hired – the state has produced two recruits ranked in the top 100, according to 247sports.com, and only one other in the top 199.

Compare that to Indiana during that same period with 31 top 100 recruits, and 13 who were ranked in the top 25 nationally, and you can see the difference.

Go elsewhere to find recruits, you say.  That’s easier said than done.  Why would a recruit pledge Nebraska given a virtual zero in brand strength?

Miles had two choices, lose with a sense of humor and get fired after pocketing millions, or lose while being a surly pain in the ass.  Miles chose the former – and good for him.

Bad for Nebraska who will sell hope in the form of the next coach who will fail to achieve a level of success the high-minded university powerbrokers demand.  They look at Big 10 brothers Michigan State, Michigan, Purdue, Wisconsin, and Ohio State, and ask why not us.

The answer reveals the stupidity of the question.  Because you aren’t.  Each of those programs hire the right coach and let him coach.  Nebraska’s job comes with an expiration date.