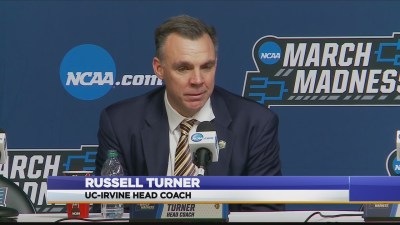 Russell Turner’s postgame explanation did him no favors, but this is still nothing more than a coach being idiotic – not hateful.

UC Irvine’s basketball coach Russell Turner tried to get in the head of Oregon player Louis King by calling him “Queen”, and social media explodes.

Turner’s choice of mockery wasn’t clever, but it didn’t effect King’s play either.  In fact, King scored 16 points, and hit 4-of-7 from beyond the arc in Oregon’s 73-54 win.

Coaches have heckled opposing basketball players since Dr. James Naismith hung peach baskets on opposite ends of a gym.  John Wooden was one of the all-time fiercest, according to those who played for him.

But now social media thought police are piling on Turner.

If @UCIrvine coach Russell Turner thought he was being clever or funny with his homophobic and misogynistic taunt, he was wrong. Words matter, and his sent an awful message. https://t.co/1MnEOxyV2W

UC Irvine should remove Russell Turner as their head coach for his grade school mentality. Why? Please read this @CydZeigler @outsports article https://t.co/FUqlg0VljM

Can we just get over ourselves a little bit with “words matter”?  Words only matter when we give them weight.  What Turner meant is nowhere near as important as our reaction to it.  There are some third rail words, and there should be.  Some unquestionably embody hatred for a person or group, but “Queen” is not among them.

I think we can safely infer Turner’s behavior as a clumsy attempt to be disruptive, not hateful.  Again, it was childish, but not a purposeful use of hate-speech.

We need to stop indulging our penchant for being offended and annoyed by everything that can possibly offend and annoy us.  The utterings of a basketball coach during competition needs to be at or near the top of the list of those things we choose to ignore.

A coach calling a kid named King “Queen” is infantile, not actionable.  The demand for the university to fire him is a hysterical overreaction by those who underestimate King’s ability to withstand an insult.

When I played soccer, competitors swapped a vowel in my first name that evoked a vulgar word for a female body part.  They yelled it, and I was not bothered.  It was just silly.  Women watching the games weren’t bothered if they heard.  It was just dopey, and I don’t give dopey names weight.

Why do we scour the news for what annoys us, instead of what lifts us?  Why do we choose to wreck the life of a guy whose greatest crime was to reveal himself to be less than clever.

Turner is a basketball coach, not a U.S. senator.  And King’s Oregon Ducks won the damn game, which serves as the best revenge.