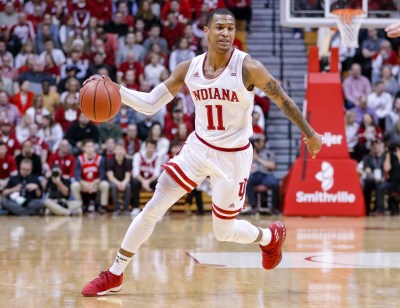 Devonte Green is a playmaker – both good and bad.

Devonte Green is an IU basketball player who some love, and others loathe, but no one is indifferent

Some believe Green will play in the NBA, and others believe he shouldn’t come back to Indiana.

He hits shots, and he turns the ball over.  He gets steals, but allows a clear path to the bucket.  He follows a great pass with another that lands in the fourth row.  Green thrills, vexes, and breaks hearts.

Lance Stephenson filled a similar role for the Indiana Pacers until his act finally wore thin.  Green doesn’t have Stephenson’s flare, but both have the unique ability to electrify and deflate.

When Indiana’s season came to an end last night, fans started earmarking players who could help the Hoosiers take another step forward.  Green was at the top of the list.  Some are certain Good Green can elevate IU back to relevance.  Others believe that Bad Devonte transferring would remove the mistakes that have kept IU from being more successful.

The best thing about the Devonte Green debate is that both sides of the debate are arguable and have roughly a 50% chance of being right.

In the interest of confusing things further, we present “Good Green” and “Bad Devonte”:

If Green can eliminate the errors, Indiana has a chance to take a step forward.  If Devonte has another lapse of judgement leading IU to suspend him for a longer period, he will prove himself incapable of avoiding immature decisions.

This could go on all day, and it will on Twitter for the entire offseason.  Juwan Morgan might have been IU’s most reliable player, and Romeo Langford the most ready for the NBA, but Green is without question the most debated and discussed in recent Indiana history.

If you want to hear a little bit from Devonte Green himself, here’s an interview I did with him prior to the season: