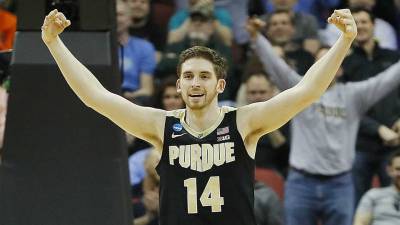 Ryan Cline worked long and hard to enjoy his moment last night. Purdue fans hope he has another great performance in him tomorrow!

When he played basketball at Carmel High School, he dominated the ball late in games that Carmel led – which was almost all of them.  Teams were forced to foul him, and Cline would sprint to the foul line, wait for everyone else to fill their spots on the lane, and confidently knock down his two shots.  I don’t believe I ever saw him miss.

I went to a lot of Carmel games his senior season just to watch him bolt to the foul line.

Cline led his high school team, made shots, and won 92-of-103 games during four years with at Carmel – including a state championship in 2013.  At Purdue, Cline and teammate Grady Eifert are a part of the winningest senior class in program history with 109 victories.

Last night showed Cline at his best.  He scored a career high 27 points on 10-of-13 shooting in Purdue’s Sweet 16 overtime win over Tennessee.  Cline has worked his ass off for 15 years to enjoy the night that launched Purdue into its first Elite Eight in 19 years.

In the second half, Cline hit all eight of his shots – six of them threes – and four of those threes in the final five minutes of regulation.  Each of those final four threes pulled the Boilermakers out of a deficit.

Cline enjoyed a sweet spot in time last night, which is the reward for a lifetime of lonely work in empty gyms.  Not only did it seem he knew every shot was going to fall.  It appeared the ball believed it was supposed to get in the basket too.  The ball dove through the net with odd and knowing speed and enthusiasm.

According to 247sports.com, Cline was ranked the 159th best senior in the 2015 high school class.  In addition to Purdue, Cline was also offered a scholarship by Northern Kentucky, Belmont, Ball State, Lipscomb, South Alabama, and UNC Wilmington.

Ratings services and a lot of other schools evaluated Cline based upon what they perceived to be his flaws – instead of his work ethic, leadership, craving to win, and ability to shoot the ball that have defined his era with the Boilermakers.

Matt Painter has a unique talent for ignoring the scouting services to recruit the kids he wants to coach – kids with whom he can compete and win.  He saw Cline for what he is – a winner with an insatiable desire to work and compete.

If Purdue had fallen in line with Indiana, Butler, and all the other schools who rejected Cline because of what they believed he could not do, they would not be where they are – one win away from their first Final Four since Jimmy Carter was president.

Ryan Cline is a special competitor, and because Painter saw it, Purdue might just achieve something spectacular – something fans will remember forever.