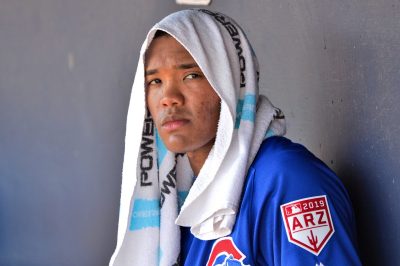 Addison Russell may be back with the Cubs later this week, and with him will come a myriad of distractions.

Addison Russell terrorized at least two women, and so he was suspended for 40 games.  That suspension will end later this week, and he will be eligible to return to the Chicago Cubs.

Fans are split on Russell’s return.  Some want him to be welcomed back because “everyone deserves a second chance.”  Others believe that domestic violence is a pox on our society and “the Cubs should be above employing someone who beat his wife.”

Those are moral judgments, and everyone is entitled to decide whether to cheer Russell or boycott Wrigley Field until Russell is a former Cub.

I hope Russell continues his therapy and finds a way to release his anger without causing emotional or physical damage to others, but while employed by someone other than the Cubs.  I will be among those refusing to set foot in Wrigley until Russell is gone.

Cubs president Theo Epstein told listeners during an interview on 670 The Score last Thursday that he has been distracted by from his baseball responsibilities by the constant work of monitoring Russell’s progression through a protocol of counseling the team mandated he participate in through his suspension – and beyond.

From a pragmatic perspective, that is a very good reason to cut ties with Russell.  The Cubs baseball operation is built to acquire and develop talent in order to win championships.  Anything that take eyes off that goal needs to be eliminated.  The Cubs are a baseball team, not a halfway house for violent husbands.

When (if) Russell comes back to the Cubs, the media will ask every teammate his thoughts about Russell’s return.  The players will be forced to support their teammate without minimizing his assaults.  That’s not an easy line to walk.  If someone errs in his comments, they will make headlines and correctly be assailed for being insensitive to victims of domestic violence.  That is a distraction.

There are media reports that the Cubs have threatened a lack of access for those who are deemed too negative in discussing Russell’s presence on the team or actions that led to his suspension.  That is a distraction that will lead to a strained relationship between the team, media, and fans.

When Russell comes to the plate for the first time at Wrigley Field – some fans will cheer and others will boo.  That becomes a distraction.

Distractions are everywhere, and they permeate all areas of the organization.  And for what?

Russell is a slick fielding shortstop (but without a Gold Glove) who has never hit better than .250 in any of his four seasons as a Cub.  His best OPS was .738 in 2016.  In his six games as an Iowa Cub over the last week, he’s hitting .250 with seven RBIs and no errors at short or second base.  On the field, Russell is okay,  Off the field, he’s a disaster.

From a pragmatic perspective, his contributions are not worth the multitude of distractions he is.  Bailing on a troubled young man might seem a harsh response by the Cubs, but that’s why they pay Epstein the big bucks.  The needs of the many outweighs the needs of the one.

If Epstein wants to support Russell the human being rather than Russell the player, I’m in.  That would make him a good friend and man.  But being a good steward of the Cubs as a baseball team/business requires the Cubs part ways with Russell – and should have six months ago.