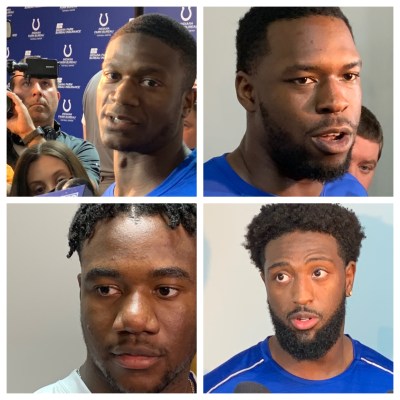 I don’t know whether verbal acuity can win a Super Bowl, but if it does, the Indianapolis Colts will be prohibitive favorites in 2019.

The first four picks of the Colts met the media today, and each was outstanding in expressing their feelings about joining the Colts and the challenges ahead of them.

As quick as wide receiver Parris Campbell was in running a 4.31 40-yard dash at the NFL Draft Combine, he’s even better at explaining his feelings about joining the Colts and playing with Andrew Luck.  One more thing about Campbell – he’s listed at 6’0″, but he’s definitely taller.  It’s rare we run into athletes who shave inches off their bio, but Campbell (unless he was wearing lifts) is 6’1″ or 6’1 1/2″.

Campbell spoke today about what he needs to work on, “I think the question kind of coming out was, ‘Can he run routes?’ Since I had never done it, everyone just kind of put a no on it. But I mean I’m not going to lie to you, it is something that I needed to work on just because I didn’t have experience. So that was kind of my main focus throughout that whole process. Then having a guy like Coach (Brian) Hartline at Ohio State, who is a technician, was great for me and great for my teammates. So just going in that was kind of my main focus.”

Bobby Okereke is an Eagle Scout – literally an Eagle Scout.  The linebacker out of Stanford once interned for former United States Secretary of State Condoleezza Rice.  Can he play?  Who knows, but he can sure as hell talk.  The NFL doesn’t decide champions with a mock UN event, but I don’t think Okereke will have any difficulty quickly processing new defensive schemes.

Okereke on what he’s doing now that he’s here, “I mean obviously you go through the whole draft process to get to now so it’s fun to get the playbook in your hands and start studying and get on the field. Coach Flus (Matt Eberflus) is a great coach, intense and I am just excited to get better.”

Rock Ya-Sin is a cornerback who wrestled through high school at a level high enough to earn offers to continue at Virginia, Virginia State, and other schools.  He decided to play football at Presbyterian, where the program was shuttered prior to his senior year.  Coaches recommended he transfer to Temple, and one year later, here he is in Indianapolis.  That’s a guy who is no stranger to hard work and adversity.

Ya-Sin spoke about whether someone might have provided an example for how he can excel as a rookie, “I feel like Darius Leonard is somebody I look up to as far as his play style and knowing about him before this process. And just understanding that he came in kind of under recruited in high school and going to South Carolina State. Then getting drafted and coming in here and making a name for himself. I really respect what he did and that is what I am trying to do.”

Ben Banogu is a physical beast out of TCU, whose NFL Combine athletic measurables compare nicely with Justin Houston when he came out of Georgia in 2011.  He’s not as strong as Houston was, but his versatility should be an asset.  Like his other rookie classmates, he is quite capable of describing what he’ll face as a former Saturday stud launching a career as a Sunday warrior.

Here’s Banogu on whether he views himself as an edge rusher or linebacker, “Well, I mean I see myself as both. They draw stuff up on the board and I was dropping back in coverage and I looked fluid doing it. Over the span of post-TCU to getting here now, I’ve done a ton of drops and I’ve worked on my coverage game – obviously like setting the edge, rushing and stuff that I have always been doing. I’ve been starting to feel comfortable in it. I feel really good in it. Now it’s just kind of going out there and showing the coaches that I can do it at a high level.”