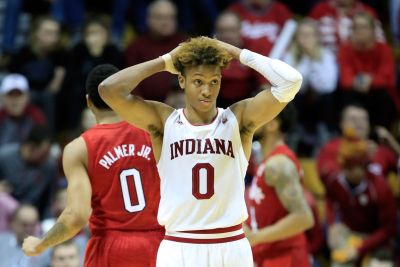 Was this pic of Romeo Langford taken when IU was winning or losing? Given that the Hoosiers finished 19-16, it’s a coin flip.

Romeo Langford finished his only year at Indiana University as the third leading freshman scorer in program history.  He’s a solid 6’5″ with a 6’11” wingspan, and a unique ability to get to the rim and finish.

His freshman year was seen by Indiana fans who believed IU was poised for a bounce back season as a disappointment.  Romeo didn’t shoot it great from deep (27.2%) as he suffered with a right thumb injury that required postseason surgery.

I’m not saying the errant shooting was due solely to the damaged thumb.  There are other issues with his shot, but there is a good chance they can be fixed.

Not one to wear his emotions on his sleeve, pant leg, socks, or face, Romeo and Indiana fans never connected.  They saw Romeo as being indifferent to competing for Indiana – as though he was in a holding pattern until he became eligible for the NBA Draft.

People who know Romeo well will tell you he is not indifferent to basketball.  He’s a stoic.  There is a difference.  If you played poker with Romeo and he was dealt a royal flush, you might believe he was holding king high.

Romeo cares.  He just doesn’t show it.  That used to be a characteristic people respected.  Today, as we evaluate people based upon how they behave during Sportscenter highlights, Romeo is seen as a noncommittal athlete – someone who plays for a reason other than a love for the game.

I spent a little time with Romeo during his senior year at New Albany High School.  As a fellow New Albany graduate as well as radio student there, I wanted to help Romeo see the media through the correct light.

A lot of athletes view the media as a pain in the ass – a bunch of unkempt mopes with microphones who ask dopey questions.  That stereotype isn’t entirely spurious, but the important thing to remember about those microphones is that they are the connect point to millions of potential fans.  I wanted Romeo to see opportunity where others saw tedium.

As I told Romeo about the rare ability he would have to communicate and affect people, he stared at me for a full hour without expressing joy, boredom, interest, or humor.  I asked Romeo a couple of specific questions at the end of my little presentation to make sure he hadn’t fallen asleep with his eyes open.  His answers told me he was listening.  He just never showed it.

Romeo is not a self-important branding machine.  He loves basketball, and has always been most comfortable among his teammates – not with the media despite my pleas.  As the Pacers build their culture as one that accommodates and encourages a family atmosphere, Romeo is exactly the kind of young man they should be searching for.  Add the measurables and potential, and Romeo would be a perfect choice at #18.

Leave a Reply to CURTIS A DIDDOCK Cancel reply