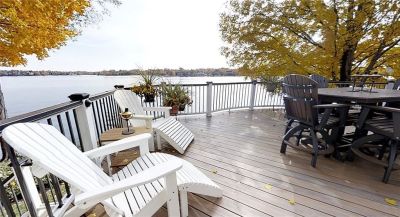 This deck belongs to a 6,600 square foot house on Geist that is selling for just over $1-million.

Tomorrow’s NBA Draft and the beginning of free agency have prompted a lot of talk about how everyone hopes to play in a vibrant and fun city.

Indianapolis, along with Milwaukee, Salt Lake City, Memphis, Detroit, and Cleveland, is often listed among those cities rejected as being uncool.

I get it.  When the idea of moving from Chicago to Indianapolis was first mentioned to me, I laughed.  Indy’s reputation as a great place has grown since we made the move, but it’s brand still lags behind most major league cities.

Here are 10 unique positives to living in Indianapolis:

10 – No national microscope.  There is good and bad about playing in LA or New York.  The bad includes daily harangues from national network talking heads, and social media blasts that get very personal.  Indianapolis is not a big enough market to drive ESPN to care about the teams here.  Silence is golden.

9 – Both major league teams are well-run.  Both the Pacers and Colts are trying to build champions through an amalgam of talent and culture.  Money is being invested in the physical plants of both teams at a significant level.

7 – Schools are solid.  For athletes with kids, Indy is a good city to raise children.  You can find great suburbs in any city with outstanding schools, but there is no lack of them here.

6 – Ease of movement.  No matter where you live in Indianapolis, you are 30 minutes or less from everywhere.  Heavy traffic is a temporary condition, not a constant inconvenience in Indy.

5 – Fans let you be.  I’ve seen Peyton Manning and Reggie Miller eat lunch in Indianapolis restaurants without a single person bothering them.  Athletes walk among us in the malls, and no one loses their Linds.  Andrew Luck rides his bike downtown, and people wave.  Indy is the city where athletes can enjoy the fruits of fame without sweating the unpleasantness of being hounded.  I saw Adam Vinatieri standing in line at a gas station, and the next time I saw him asked what that would have been like when he played for the Patriots.  He said that normal behavior was impossible there.

4 – Real estate prices.  You can buy a hell of a house on a lake in Indianapolis for what a 2,000 square foot home in suburban Chicago or Los Angeles would cost.

3 – Weather.  Now I’m not going to tell you Indianapolis is like San Diego.  It’s not.  But it’s void of the messes in many places.  The winters are mostly ice and snow free compared to Chicago, Detroit, the Twin Cities, Buffalo, and virtually anywhere else to the north.  Unlike coastal regions, there are no hurricanes here.  Earthquakes are unheard of.  Tornadoes are not nearly as frequent as in many other midwestern cities.  The heat isn’t oppressive either.  We have summers where the thermometer rarely hits 90.

2 – No obvious entrenched racism.  I’m not going to say racism is non-existent in Indianapolis because I an ineligible to be a victim of prejudice, but having lived in Chicago and (briefly) in St. Louis I’ve seen plenty of it.  I don’t hear or see it here.  In Indy, people are truly judged based upon the content of their character.

1 – Virtually asshole free.  People in Indianapolis are friendly, tolerant, and considerate.  After spending most of my first 30 years in and around Chicago, I grew unnerved by the relentless unfriendliness on roads, in bars, and on trains.  I drove around the Northside of Chicago for five hours one day in search of a fast food employee who would greet me as though I was a human being rather than an inconvenience.  Finally, at a Wendy’s, a cashier looked me in the eye and said, “Welcome to Wendy’s!”  In Indy, politeness is real and sincere.