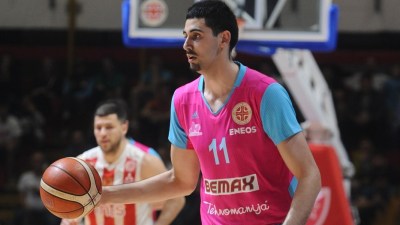 Goga Bitadze is 6’11”, can shoot it, and is a rim protector. Can he play in the NBA? Who the hell knows?

If you’re looking for hysterics about how the Pacers screwed up by drafting another big, you won’t find it here.  Goga Bitadze is coming to the Pacers, and I don’t know what the hell that means.

I assume Pacers president Kevin Pritchard and the other big brains in the front office know what they are doing, and I guarantee they know a hell of a lot more about Bitadze than you or I do.

Even Nate McMillan professed ignorance about the 6’11” Georgian last night, so rushing to judgment about the pick is way premature.

Remember when NFL free agency began and Colts fans were shrieking about how GM Chris Ballard was asleep at the wheel?  And a couple of weeks after the dopey money was spent by teams trying to win press conferences, he signs Justin Houston and all is forgiven.

I’m far more excited about the “trade” that will bring T.J. Warren to town than Bitadze.  Warren will start at small forward, and is a younger and cheaper version of Bojan Bogdanovic.  He was acquired by writing the Phoenix Suns a check – without shipping a basketball asset in return.  The Pacers also received the 32nd overall pick in the deal, which they spun in another deal into three future second rounders.

That work by Pritchard is fan more important than drafting a 19 year-old Georgian who may or may not provide immediate depth to a front court with Domas Sabonis and Myles Turner.

People clamoring for a trade involving either Sabonis or Turner need to slow their roll just a bit.  Depth is good, and that’s what Bitadze will provide next season – at best.  Projecting a 19 year-old Euro as an immediate starter without ever seeing him against NBA comp is crazy.

With both Thad Young and Kyle O’Quinn likely departing via free agency, there are plenty of minutes at the four and five if Nate McMillan can find a way for these three pieces to fit together.

In a 24-hour period, the Pacers acquired a starting three, a big with upside, and four future second round picks in exchange for a second rounder.  That’s a great day’s work.

There’s plenty more to do, so let’s wait until camp opens to evaluate Pritchard’s offseason.