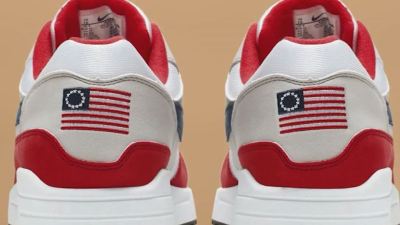 These shoes were pulled before release because Colin Kaepernick saw imagery of slavery in the use of the Betsy Ross flag.

Slavery was horrible – a massive stain on American history.  Racism remains a huge and shadowy blight on our society.  People are people, and to suggest one group is superior to another because of race is idiocy.

But does that mean every American image created prior to the abolition of slavery should bear a stain that reduces it to a symbol of racism?

Nike shipped special Independence Day “Air Max 1 Quick Strike Fourth of July” sneakers featuring the 13-star Betsy Ross flag to retailers, but asked they be returned because former NFL quarterback Colin Kaepernick complained to the company.  He said that Ross flag is an offensive image because of its connection to slavery.

I don’t want anyone offended, but if the Ross flag has somehow become a source of historical distress for anyone, they have become sensitive to imagery at a level where offensive connections exist everywhere.

This has become an exercise like the game “Six Degrees of Kevin Bacon.”  Why Kaepernick doesn’t see the Ross flag as an icon of freedom for the nation whose collective conscience rejected slavery, I don’t know.  That flag, regardless of the number of stars is the emblem of this nation – imperfect, but trying to evolve quickly toward reason and acceptance.

If the Ross flag is a symbol of racism, what about Independence Day?  There was no independence for slaves on July 4, 1776.  How about celebrating George Washington as the Father of our Country?  He was a slave owner himself.  How can we continue to put a portrait of Washington on the quarter and one-dollar bill?  What about the nickel and two-dollar bill with slave owner Thomas Jefferson?  How about Andrew Jackson on the $20?  (Actually, there are a lot of people upset with Jackson on the $20, and rightly so.)

There is a point at which anger toward imagery thought to be offensive by an individual is the responsibility of the offended.  It appears if Kaepernick squints hard enough – as he did at the 13-star flag on the heel of these Nikes – he can draw a line between any American symbol and the parts of its past that are regrettable, reprehensible, and truly offensive.

Kaepernick is giving those who disagree with him a chance to accurately label him as vulnerable to bizarre leaps of illogic.  By lamenting the innocuous, he is wasting his opportunity to call out truly horrible remnants of our wretched past.

People must acknowledge our need to move forward toward a truly inclusive societal philosophy, and Kaepernick has been a big instigator of important conversations.  If his actions in sitting for the National Anthem were questionable, no one could argue his dedication to the cause of racial equality.

Kaepernick’s disdain for these shoes has cheapened his position as a leader.  That is a shame because we need loud voices to pull us toward enlightenment.