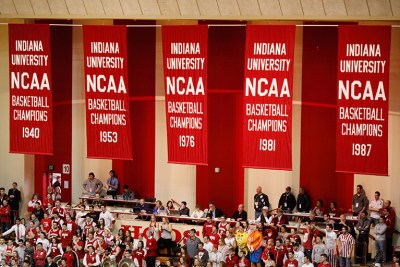 It isn’t just about banners for Indiana Basketball.

IU Basketball fans say “This is Indiana” a lot – as though evoking the name of the university and state that takes such pride in its basketball heritage can shake off the rubble and cobwebs of a program that has receded into national irrelevance over the past quarter century.

During that 25-year period, there has been one trip to an Elite Eight or beyond (which ended in a 2002 National Championship game loss) and three Big 10 titles.  Nine of the last 16 seasons have ended without an NCAA Tournament bid.

The argument about how current coach Archie Miller should rebuild the program rages like a debate over immigration among the petulant children serving in congress.

Some want Indiana to do what it did when the Hoosiers were feared – recruit the hell out of Indiana, be tougher and smarter than everyone else, and win the Big 10 like it’s their birthright.  Others say the quaint notion of winning by building a culture with a foundation of players native to the Hoosier State is dated – a denial of the advancements of college basketball.  Talent wins championships.

I am firmly on the side of those who want IU to return to its roots of being tough, smart, and filled with the best players from Indiana.  It seems Archie Miller subscribes to that romantic vision of Hoosiers playing for the Hoosiers.  We haven’t seen a lot of tough and smart yet, but Miller has just welcomed his second recruiting class to Bloomington, and they have been filled with Indiana All-Stars.

The goal of Indiana Basketball cannot be simply to win – any program can win if it is willing to do anything it takes to accumulate talent.  IU must win without cheating, with students who earn meaningful degrees, by playing a team-first style of basketball, and with a roster of Indiana’s best.  Many argue those restrictions make winning more difficult.  I believe they will allow the program to win consistently.

So why do I keep coming back to IU recruiting Indiana prep kids as a key to success?  Is it a romantic hope for a return to a “Hoosiers” style of play, and a similar ending to the greatest of all sports movies?  Not at all.  It’s about quality of play.

That’s a lot of talent for a state the size of Indiana.

Indiana Basketball is not about banners – it’s about knowing that each banner represents winning through doing it the right way.

If that’s too tall an order for a coach, they don’t need to apply for the IU job – because THAT is the IU job.

If Bo Ryan could figure out how to win consistently at Wisconsin, how the hell hard could it be at Indiana?

I believe IU is headed in the right direction.  Trayce Jackson-Davis and Armaan Franklin – both from Indiana – represent a very talented and smart recruiting class.  Returning players will be healthier and better developed.  Miller has had another year to acclimate to Bloomington.

That will be Indiana!