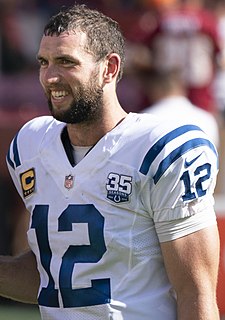 Andrew Luck has reason to smile two days prior to the opening of training camp.

Colts GM Chris Ballard and coach Frank Reich are running the Colts as a meritocracy.  You excel, you earn.

That’s the way the NFL works.  If Player B outplays Player A, Player B gets snaps and Player A sits.

Ballard has shown a proclivity toward drafting very talented and driven players who push veterans, and that is what we are going to see during camp and the preseason – young pushing old, and old trying to hang on to what they have worked so long to attain.

It’s easy to look at the Colts roster and feel the starters are mostly set.  Twenty-one starters return to a team that shocked the NFL by bouncing back from a 1-5 start to earn a playoff berth and win a road playoff game in Houston before wilting at Arrowhead Stadium.

There are a few spots that are beyond debate given continued health, but fewer than you might think.  Obviously, Andrew Luck and T.Y. Hilton are the starters at QB and WR1.  The offensive line appears solid with Anthony Castonzo, Quenton Nelson, Ryan Kelly, Mark Glowinski, and Braden Smith.  Reigning NFL Defensive Rookie of the Year Darius Leonard is going to start at linebacker.

Other than that, there a bunch of position battles that bear watching:

Running back – Marlon Mack is the clear starter, but the Colts have an interesting couple of backs who will battle for the third spot behind Mack and Nyheim Hines.  Spencer Ware signed with the Colts as a free agent and Jordan Wilkins returns for a second year.  Colts will keep one of them.

Tight ends Eric Ebron and Jack Doyle are going to play a ton at tight end, but Mo Allie-Cox is going to get a bunch of run too.  It might be interesting to watch how Ebron will adjust to fewer targets because of Doyle’s return from injury as his goal is to set the record for touchdown receptions.

Devin Funchess is the clear front-runner for the second wide receiver spot.  Ballard didn’t sign him to a deal paying him $10-million to watch other guys catch balls, but Funchess has lived up to his draft position during only one of his four NFL seasons.  Deon Cain could push Funchess, depending upon the health of his surgically repaired knee.  Rookie Parris Campbell will be deployed in a variety of roles, but primarily work out of the slot.

Let’s work from the back of the defense to the front.  At safety, Malik Hooker will start at free, and Clayton Geathers will be the starter at box.  It wouldn’t be a surprise if Geathers had trouble staying healthy and Khari Willis replaced him and never left.

It would seem logical to expect Pierre Desir and Kenny Moore to start at corner as each will earn $9-million this season, but I think Quincy Wilson and Rock Ya-Sin are going to play – a lot – and at some point one of those guys will be a starter this season.

Linebacker is a funky spot in that it hard to project guys like rookies Ben Banogu and Bobby Okereke.  Are they outside linebackers or speed rush guys – or both?  Bobby Okereke says he can play all seven spots up front, which seems ambitious.  Will Okereke unseat Anthony Walker at middle?  A bunch of guys are going to have the opportunity to earn snaps opposite Leonard.  Defensive coordinator Matt Eberflus used a bunch of linebackers last year, and I would expect to see linebackers shuttling in and out often.

The defensive line is going to be the one spot on this roster where veterans are invited to compete en masse.  Justin Houston, 30, signed as a free agent from Kansas City.  Margus Hunt, 32, is back, as are Jabaal Sheard, 30 and Denico Autry, 29.  Pushing those old men will be Tyquan Lewis, Kemoko Turay, Grover Stewart, Jihad Ward, and others.

In truth, it really doesn’t matter which of that group starts.  They will all be mixed and matched depending upon the situation by Eberflus.

As for the specialists – guess what, Adam Vinatieri, Rigo Sanchez, and Luke Rhodes are back and their jobs are safe.

Just as we had no idea that Smith would establish himself as an outstanding starting right tackle (as camp opened last year Ballard told the media he believed Smith was a guard), there is no way to know what the hell the starting lineup is going to be come September 8th in Los Angeles.  There are too many variables.

But two things are true about this roster.  It’s deep enough at the bottom that good players are going to get cut, and if healthy it’s good enough at the top to win 10 games – as that was their total last season.