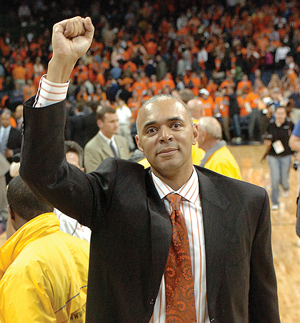 Dave Leitao will sit for three-games, and his Blue Demons will be mocked, but nothing changed today.

Lot of jokes about DePaul cheating its way to the bottom of the Big East because the NCAA Committee on Infractions levied some mostly meaningless penalties against the Chicago school’s basketball program.

I enjoy a good joke at DePaul’s expense myself, but the joke is that the NCAA smited a program that did nothing more than try to help a recruit gain eligibility through closely monitored diligence.

Here is what happened – an assistant director of basketball operations was directed to live with a recruit to make certain he completed the course work necessary to be eligible to compete.  That is an impermissible benefit, according to NCAA rules.

As a result, head coach Dave Leitao is suspended for the first three games of the regular season, a three-year show-cause order for the former associate head coach who ordered the assistant DOBO to live with the recruit, vacation of DePaul’s wins for the games in which the recruit played while ineligible (probably not many – I’m guessing), and some paltry self-imposed recruiting restrictions.

With basketball players getting paid by shoe companies, boosters, and coaches, the NCAA is wasting bandwidth on a struggling basketball program that did nothing more than try to help a kid develop solid work habits.

At North Carolina, scholarship athletes were herded into shadow classes and a basketballplayer earned a spot on the Dean’s List without attending a class, but DePaul is waylaid because a potential student-athlete attended class at the direction of a a program staffer.

If the NCAA wants coaches, media, and fans to take seriously its lofty and angry rhetoric about cleaning up college basketball’s corruption, it needs to go after a program with skin in the game and presence on the national landscape.

DePaul is not that program, and these violations are hardly worthy of acknowledgement by those who would like to see the game scrubbed of self-promoting, money-grubbing, win-hungry oafs who suckle at the teat of a cash rich system.

The NCAA needs to penalize or shutter programs that routinely break real rules, not slap the wrists of the DePauls of the world who try to help players become better students.