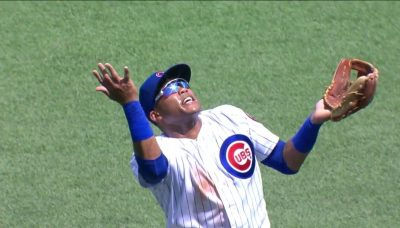 Addison Russell is an Iowa Cub because Theo Epstein didn’t have the stones to release him when he should have.

People who make bad decisions – or exhibit a lack of behavioral control – in one area will likely make them in others.

Such is the case with Cubs second baseman Addison Russell, who was accused in social media posts by his ex-wife of general idiocy that included physical abuse and emotional terror.  Russell was suspended by Major League Baseball before being welcomed back by the Cubs in early May.

Cubs president Theo Epstein explained that he wanted the Cubs to play a part in helping Russell improve as a human being instead of casting him aside.

Over the weekend, Russell’s off-field buffoonery appeared to extend to the field as he misplayed to pop-ups, reportedly missed multiple signs, and was doubled off second on a routine line drive to left.  All that happened in the same game.

As trust in Russell eroded to a critical point, the Cubs made the call to send him down to AAA Iowa as Willson Contreras was activated from the IL.

The Cubs clearly overestimated their ability to aid in Russell’s ability to overcome adversity when they decided to tender him a contract extension after his ex-wife’s credible accusations of abuse led to his suspension.

That was wrongheaded from jump street, and Russell has failed to live up to Theo’s self-indulgent generosity.  he’s responsible for building a roster that wins games, not running a halfway house for wayward ballplayers.

Employment is a privilege, not a right, and the Cubs would have been wise to cut ties with Russell for a variety of reasons when they discovered he battered his then wife.  It was the best call for the team, Epstein (who has wasted innumerable hours monitoring Russell’s progress) and likely the best call for Russell, whose attention would have been gained by a Cubs refusal to employ him.

Russell is not an Iowa Cub because he tormented his wife; it’s because he’s simply not a reliable baseball player.  Epstein made the obvious call that they are better off with Robel Garcia and his gaudy 1.020 OPS at second than their problem child.

Epstein’s decision to continue to employ Russell answered an urge to help him through kindness and friendship.  The spoiled kid who needed a grown up consequence from his employer got a helping hand.  It was rewarded with more opportunities to screw up, and Russell used them.

Russell is a talented baseball player, but talent without discipline will always be wasted.

There will be more chances for Russell prove himself worthy of a major league team’s trust, but it will take the stark reality of being a former Cub to give him a chance to get there.

That was as true last September as it is today.  Sadly, Epstein didn’t know it then – and it’s unclear whether he’s learned it since.