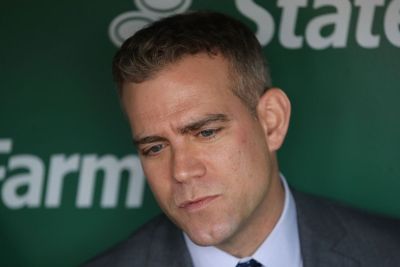 Not a lot of smiles in the palatial Cubs front offices these days.

The Cubs have a decision.  Exercise patience, hoping the team magically finds the exuberance that made them so much fun to watch from 2015 to 2017, or sell some parts to restock a depleted farm system.

The trade deadline is two days away and president Theo Epstein could try to find a piece of two to bolster the bullpen and infield, or he could sell players for prospects to reload for another few years of excellence down the road.

Sadly, Addison Russell, a guy who used to be referred to as “the next Barry Larkin”, has lost all value through entrenched offensive mediocrity and behavioral lapses that brought allegations of domestic violence earning in a lengthy suspension.

Kyle Schwarber is immensely popular in Chicago, but his stats (minus home run numbers) are imperfect.  His career .228 batting average and lack of gold glove defensive abilities will make him tough to move too.

Like most center fielders through the years on Chicago’s north side, Albert Almora is a place holder whose potential is defined by his present.

So who can be moved to go get young prospects?  Javy Baez, Kris Bryant, Anthony Rizzo, and Willson Contreras are off the table as in their prime veterans.  Jason Heyward is enjoying his best season as a Cub, and their pitching is already thin as hell.

The Cubs are in the unenviable position of not having the assets necessary to lure a trade partner into sending elite prospects to Chicago, and also void of the prospects needed to yield the return of a win-now player.

The Cubs are stuck in an emotional and physical malaise from which they cannot lift themselves.

They are too good to tank, but too mediocre to win a championship.

Like Stealer’s Wheel used to sing, the Cubs are “Stuck in the Middle with You”.

The trade deadline should come and go without the Cubs making a major deal.  Trades are about timing, and the timing for a major deal is poor – barring an opposing GM’s idiocy, which is always a possibility.

Theo went hard after a world championship in 2016, and this era of OK to good baseball is the price for what we enjoyed during that glorious fall.

Sure, it would be great to have Gleyber Torres playing second base for the Cubs instead of the Yankees, but would it be worth that banner?  That’s a topic for another day, but what is for sure is that the Cubs don’t have another Torres in the minors to deal for another Chapman, and what the Cubs would surround Champman with would not make a run to another banner.

The best move for the Cubs is to wait until the 2019 dust settles, and retool for a decade of excellence.

Or they can wait for Bryant, Lester, Hamels, Schwarber, Baez, and Castillo to drift away to other teams or retirement.

Whatever happens, we’ll always have 2016.

One thought on “Cubs need to stand pat at the trade deadline, then get busy in the offseason”