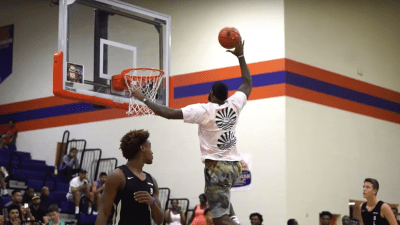 LeBron pleases the fans at one of his son’s game by joining the team’s layup line.

LeBron James has no peer.  He is the most famous basketball player in the world, and the best player of his generation – without argument.

He’s also a dad who wants to watch his son play – especially during the summer when he’s not putting on a show for Lakers fans.

So LeBron goes to a game, knows that all eyes are on him, and tries to please fans with a dunk.  He gets in the layup line, and throws down a dunk.  The video of that dunk goes viral and everyone has an opinion.  Some love it, and some loathe it.

During a game, his son’s team executes a nice alley-oop.  LeBron runs onto the court to celebrate.  Some love that he’s there supporting his son, and others see this as grandstanding because he’s drawing attention that rightfully belongs to the kids.

Complicating matters – it’s also true that if LeBron does not run onto the court, that play wouldn’t have been on Sportscenter or been seen millions of times on social media.

There is no way for LeBron to do anything in public without being a polarizing figure.  Whatever he does – people love or hate it.  That’s what happens when you are not only the best, but the most famous.  LeBron James provides reasons to cheer and boo in equal measure.

When my son played summer basketball, so did Michael Jordan’s two sons, and one night in Louisville, Ryan’s game was sandwiched between games featuring each of the Jordan kids.  Michael sat on the baseline eating an ice cream cone with a security guard to his right.  Security was there to allow Michael to watch the game without being pestered by autograph hounds.

He sat quietly, and never drew attention to himself.  This was a couple of years after he retired, but he was still one of the most recognizable men on the planet.  Michael was there to see his kids, not be seen by millions via social media.

I would prefer LeBron acted a little more like Jordan, and maybe he does most of the time.  People may see LeBron’s behavior as an example to follow in gyms all across America, and that means dads running onto the court every time a kid makes a great play.  That’s not good for kids or basketball.

Is it good parenting?  I would never presume to tell LeBron James or anyone else about being a good parent.  Being there is where it starts, and LeBron was there.

James and Jordan might have responded differently as dads supporting their kids, but one thing is certain, it’s not easy being alone at the top of a mountain with all eyes on him – judging him, making a mountain out of a molehill.  It’s not easy being LeBron, LeBron’s wife, or LeBron’s kids.  His world is a fishbowl with billions of eyes.

Maybe LeBron can ignore the debates he causes wherever he goes because it has been his constant companion since he was in high school.  Maybe it wears on him.  Whichever it is, the world will continue to judge him – rightly, wrongly, or both.

One thought on “As a basketball player and a dad, it’s hard to be the King”