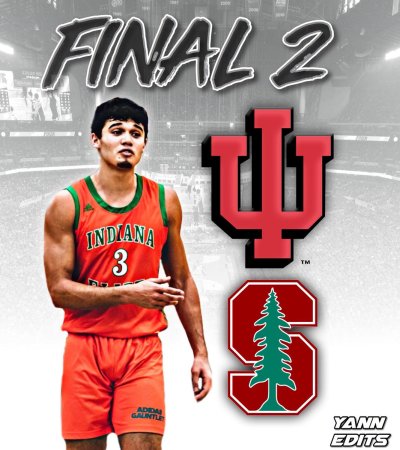 Anthony Leal is a senior at Bloomington South High School with a hell of a decision to make.  He can study and play basketball at either Indiana or Stanford for free.

This is a little like being forced to choose which winning lottery ticket to cash..

There are great reasons to choose both programs, and that’s what makes the decision so tough.  It’s not like he’s choosing between North Dakota State and Stanford or Texas Southern and Indiana.  Both are stellar universities (Stanford with an edge) that have solid basketball programs (Indiana with an edge).

Indiana is very familiar to Leal.  His parents work at the school, he’s knows the players, and he’s friends with Trey Galloway – another 2020 recruit who committed to IU a couple of weeks ago.  Familiarity can help a young man transition to college with fewer bumps and bruises.

Stanford is one of the finest academic institutions on the planet.  The athletic department doesn’t not stand in the way of athletes seeking their academic potential.  It’s basketball heyday is in its rearview mirror, but basketball isn’t forever and eventually the lessons learned at a place like Stanford will inform a life well-lived.

Go to Indiana, and Anthony will never be without a job.  Hoosiers are well taken care of by companies run by Indiana fans, or by potential customers with IU ties.

As for Stanford, there are not many – if any – unemployed Stanford grads.

From a basketball perspective, Indiana has a clear edge.  That’s surprising given that IU has not played in the NCAA Tournament since 2016, and has barely been a .500 team during Archie Miller’s first two seasons, but Stanford has been a sub-mediocre Pac-12 team for more than a decade.

Stanford’s woes began in 2008 when coach Trent Johnson left The Cardinal to take over the program at LSU.  Since then, Stanford has “enjoyed” three winning conference seasons and played in only one NCAA Tourney.  The program’s total Pac-12 record during those 11 seasons is 91-107.

What’s that mean to a kid choosing a school?  Who the hell knows?  Maybe Anthony believes he can help turn things around in Palo Alto.

There are a variety of factors that drive a family’s decision when choosing a school for an athlete being recruited.  Facilities, relationships, academics, ability to win, path to a professional career, proximity, and more.  Every kid orders his priorities a little differently, so who knows what Anthony will do.

Smart guys in the recruiting analysis business predict he’ll pledge Indiana tonight, but the mind of a high school senior can change quickly and often.

Tonight we’ll all find out together whether Miller will continue his impressive streak of earning commitments from in-state talent, or whether Stanford coach Jerod Haase will get a smart and athletic kid who can shoot.

That’s soon enough.  And whatever he decides, let’s not get too excited or agitated.  He’s an 18-year old kid.