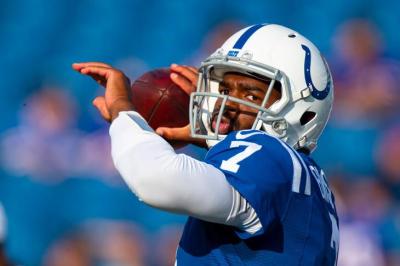 Among the many things Colts fans would like to unsee from last night’s preseason opener was Jacoby Brissett holding on to the football too long.

Watching preseason football is a total waste of time.  Maybe the players and coaches get something out of it, but for fans and media, it’s a non-event we can’t stop watching.

I sat in front of the TV last night for three hours trying to figure out what was going on as the Colts and Bills played.  If the point is to win, why did the Colts sit as many starters as they played.  If the whole deal is to only evaluate players, why use a replay challenge or call timeouts.

None of it makes any sense.

The big story this morning is that Chad Kelly outplayed Phillip Walker as the battle for the third QB spot heats up.  What?  Neither of these guys should be in a position to take a meaningful snap in the regular season.  EVER!  If they do, the Colts have no chance to win a game.

I’m as guilty as anyone.  At Colts practices, I spend an inordinate amount of time watching Kelly and Walker throw.  In the moment, it’s interesting.  Afterward, I feel like an idiot.  The Kelly vs. Walker battle is an empty calorie question.  It’s utterly irrelevant to the Colts hopes to win a Super Bowl.

As for the roster decisions Frank Reich and Chris Ballard need to make with wide receivers, what can we figure out by watching Reece Fountain and Deon Cain catch balls thrown by quarterbacks not named Andrew Luck against defensive backs who won’t make the Bills roster?  It’s like trying to determine the best driver as they sit in cars without wheels.

The Colts defense looked off, but it should with Darius Leonard, Kenny Moore II, and others not playing.  What the hell are they supposed to look like?

The four preseason games are at least two too many for NFL teams to figure out who to keep and who to cut.  Preparing to play in the regular season has already been cut to two games.  Many starters sit in weeks one and four, so what the hell is the point?

Meaningless football is a waste of our time.  We know it, but we stare blankly at the TV trying to make sense of our interest in a thoroughly tedious and insignificant event.  Announcers try to keep players wearing the same number straight.  Coaches hope only to leave the field with a squad as healthy as they were when his team arrived.  Fans bitch and moan about wasting their time – as they waste their time.

Media hope only for a quick game so they aren’t up against deadline and can get a couple of hours sleep before flying home the next morning.

Everyone just wants real football to start.  What happens prior is nonsense that no one has the stones or discipline to stop watching, playing, televising, or hosting.

Someone, please, put an end to four game preseason football schedules, so that I can stop feeling like a moron for watching it.