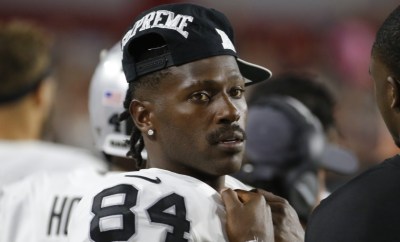 Antonio Brown has million dollar hands, frostbitten feet, and a brain that doesn’t want to be protected.

Wide receivers are crazy, and the better they are, the crazier they are allowed to be.

Oakland Raiders wide receiver Antonio Brown is really good, has become really crazy, and the Raiders now have no choice but to embrace it.

When he played for the Steelers, Brown’s antics expressing displeasure with the offense and quarterback Ben Roethlisberger were a Sportscenter staple.  They decided he was no longer worth the trouble or money, and accepted a third and fifth round pick to get rid of the best receiver in the game.

The NFL has ruled that the helmet Brown prefers is unsafe.  He refuses to wear a different model helmet that has been approved by the NFL, so he is not allowed to play.  Brown is either using that to avoid training camp, or he’s truly bananas.

Brown’s agent Drew Rosenhaus appeared on ESPN’s Get Up this morning and said “Antonio wants to resolve this and be with his team.”  Really?  There are 90 guys in NFL camps with 31 teams and 89 with the Raiders.  That’s 2,879 players who are wearing NFL compliant helmets, and one with a problem.

Let’s remember why the NFL enacted rules about helmet safety.  Deaths from CTE and a subsequent lawsuit that cost the NFL $765 million spoke loudly to the league, and a serious look at brain safety led the NFL to mandate helmets meet a standard Brown’s does not.

To look at one of the many former players suffering from football related brain ailments that seriously degrade quality of life and decide to ignore the guidance of neurologists, well, that level of crazy is advanced.

Brown also has a foot issue caused by cryotherapy that went awry, but let’s not even get into the stupidity of a guy who runs for a living welcoming frostbite to his feet.

Talent wins football games, but not talent alone.  Brown has talent – a lot of talent.  But that talent is countered by a level of nuts that makes productivity hard to predict.  In fact, it makes attendance hard to predict, as the Steelers found out last year.

Winning NFL games is hard enough without a crazy wide receiver demanding to be allowed to put at risk his longterm health by wearing a helmet with which he’s comfortable.

The Raiders traded two middle round picks for the best receiver in football, and they might have been fleeced.  That’s the NFL.