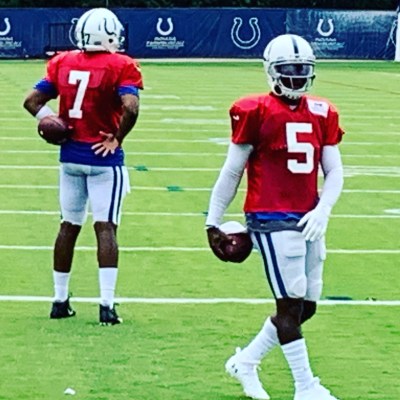 If Luck can’t play in LA, here are the Colts two quarterbacks – Jacoby Brissett and Phillip Walker. If either in hurt in the final two preseason games, it could cost the Colts their season.

Taking a chance on Chad Kelly as a favor to his Uncle Jim might have terrible consequences for the Indianapolis Colts.

Colts coach Frank Reich has been asked many times and in many ways the last two days whether Jacoby Brissett will be among the starters who will sit Saturday night against the Chicago Bears at Lucas Oil Stadium.  It’s a great question.

Saving a back-up quarterback during the third preseason game is virtually unprecedented in the history of these useless events, but in this case it’s a virtual certainty because losing Brissett to injury would cause roster chaos, even if Andrew Luck is healthy for the opener.

That’s because Chad Kelly will serve a suspension during the first two weeks of the regular season because he wandered into the home of some people he didn’t know – and more importantly who didn’t know him – following Broncos teammate Von Miller’s 2018 Halloween party.  Kelly reportedly sat on the couch mumbling incoherently with the residents of the home, who responded to the intrusion by hitting Kelly with a vacuum cleaner tube until he left.

So all of a sudden, the collective health of the Colts at the quarterback position is important in the extreme.  If any of the quarterbacks, other the Kelly, get hurt in the remaining two preseason games, the Colts will need to find another quarterback as quickly as they did at the end of the 2017 preseason when Brissett was acquired in exchange for Phillip Dorsett in a deal with the Patriots.