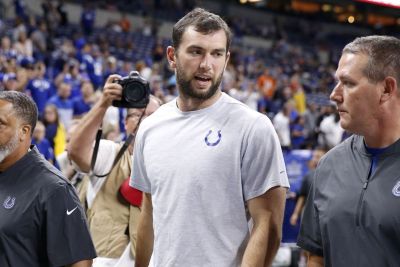 Andrew Luck walks off the field for the final time – to a chorus of boos from those who remained.

There are a lot of factors that cause people to complain about things, and while some who booed Andrew Luck at the Colts vs. Bears game on Saturday night could have been genuinely pissed off at their former QB, most booed for other reasons.

Six factors that may have led to the booing are listed below:

6 – Chance to get on Sportscenter

ESPN loves to illustrate stories with video.  What better to show after Saturday night’s bizarre sequence of events than batshit angry fans booing as Luck left the field?  “Hey, let’s get on Sportscenter” has become a rallying cry for idiocy, and that might have prompted some of the boos.

People take fantasy football seriously, especially in leagues where there is a cash buy in.  For team owners who grabbed Luck in the first or second round, their season has ended before it began.  We are right in the middle of draft season, and Luck’s retirement might have caused the ruin of many teams.  Losing a guy to injury who was expected to deliver a lot of points, that’s one thing.  When a guy simply decides to retire, fans might get salty – especially after several man sodas on a Saturday night.

The Colts at 15-1 appeared to be a reasonable investment, but the odds immediately dropped to 30-1 when Luck’s retirement became public knowledge.  While the Colts will have 52 of the 53 players on the roster they expected on opening day in Los Angeles, the guy missing is the reigning NFL Comeback Player of the Year and appeared to be ready to enjoy his prime with a team worthy of his abilities.

Tickets are pricey, and so is travel.  A caller to Dan Dakich’s radio show today spoke about investing $18,000 in season tickets and putting together a family trip to Nashville to see Luck and the Colts play the Titans.  She feels defrauded by an organization that waited until the report broke on Twitter to get things straight with fans.

2 – Inebriates are prone to anger

What kind of Colts fans wait to leave Lucas Oil Stadium until the bitter end of a meaningless preseason game?  Guys and ladies who haven’t finished their beers yet, that’s who.  A three-hour game can easily become an eight-beer affair.  Yelling and booing becomes the primary mode of communication for those who overindulge.

1 – Fans upset with the perceived deceit from to Colts organization

Having been sold a bill of goods multiple times, Colts fans have not forgotten what they interpreted as lies regarding Luck’s health and the probability of a quick return to action.  It’s possible Colts owner Jim Irsay has spoken through a prism of hope rather than deception, but fans recall all too well phases like “the bicep is pristine!”  Trust takes a lifetime to build and a second to destroy.  Colts fans simply do not trust what they hear regarding Luck, because so little of it has been accurate.