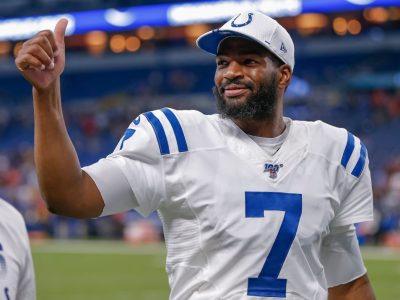 Brissett extension is a win-win!

That’s a lot of heavy lifting by Colts GM Chris Ballard on Labor Day, and all of it is smart.

The Colts needed a back-up not named Phillip Walker, and with Chad Kelly suspended until the third game of the season, there was no option but to sign the best guy they could get.  That was Hoyer.

As for the Brissett extension, here are five reasons it was smart for both Brissett and the Colts:

5 – Buys Colts two years of kicking the tires.  No one knows whether Brissett has the tools to take a team to the multiple Super Bowls owner Jim Irsay covet.  The Colts have no alternative to finding out in 2019.  If he’s the long term answer at QB, Ballard can sign him to another extension next year.

3 – Brissett has a great situation in Indy.  Here’s a partial list of the assets Brissett will enjoy this season:

Brissett has all he needs to be as good as he can be.

2 – Brissett will never have to sweat money again.  $20-million of the total of the extension is guaranteed, and that means unless Brissett is a grade-A moron (and he’s not), his budget worries are over.  With $20-million earning a very conservative 5%, he’ll have an annual base of $1-million a year until the end of time.  Even backing out taxes and some fun money for short-term goofy buys, he’ll have $10-million.  That will yield $500K annually forever – at %5.  And as of last week, he had no agent to take a significant percentage.

1 – If Brissett struggles, Colts draft a QB for 2020 and beyond.  The new guy on his rookie contract won’t cost much, and Brissett will be a great insurance policy as he gets his feet wet in the NFL.

No one knows whether Brissett has the tools to take a team to the multiple Super Bowls owner Jim Irsay covets, but the Colts have no choice but to find out in 2019.  If he’s the long term answer at QB, Ballard can sign him to another extension next year.  If not, the Colts didn’t paint themselves into a salary cap corner.