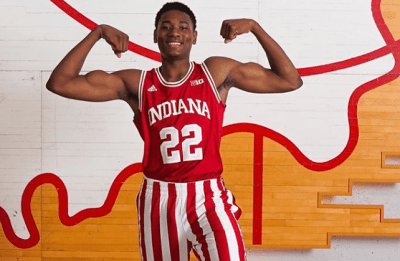 Jordan Geronimo is coming to Bloomington, and I have no idea what that means.

The 6’6″ swingman who apparently can touch Vermont from his high school gym in New Hampshire committed to Indiana’s basketball program yesterday, and Twitter exploded.

Geronimo is the 85th ranked player in the 2020 high school class, according to 247sports, and I hope he’s an all-time great for the Hoosiers.  Watching his highlight reels, he looks good, but no one misses a shot or turns the ball over in a highlight tape.  That’s why they are called highlight tapes.

He reportedly has a seven-foot wingspan, and that’s a good thing if true.  Those numbers are occasionally exaggerated for recruits.  Given that Geronimo just concluded his official visit to the IU campus, I assume he was measured there and the number is accurate.

The point is we don’t know what or who this young man is.  I’ve read Dustin Dopirak’s piece at The Athletic.  In it, Geronimo’s coaches pledge their love for their player.  That too is standard.  Few coaches talk smack about one of their own players.

I’m not saying Geronimo might not be a hell of a player.  He could be incredible.  I remember talking to O.G. Anunoby when he committed.  He was ranked #294 nationally, and I had to ask him how to pronounce his name.  Now Anunoby is a world champion, but let’s tap the brakes on Geronimo – a young man virtually none of us has ever seen.

It seems he is smart, athletic, and long.  That’s a good place to start for an Indiana commit, but it’s only a start.  How about we let him play his senior high school season before we raise the bar too high.

Here is an Adidas Gauntlet highlight reel (courtesy of our friends at Inside the Hall), if you care to peruse Geronimo doing everything well and not missing a shot.