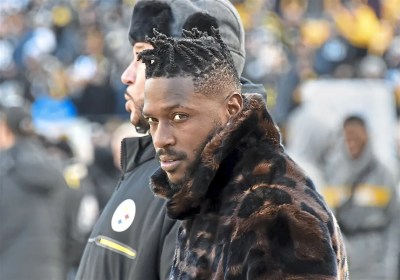 You tell me from this picture of Antonio Brown – crazy enough to punch a GM in the head – or no.

Raiders wide receiver Antonio Brown is objectively believed to be crazy.  He’s setting a new standard for NFL narcissism, and that’s saying something.

Brown reportedly had a disagreement with GM Mike Mayock yesterday that nearly escalated into a fistfight.  Because of that, and a short but colorful history of non-compliance with management, Brown will be suspended by the Raiders.

This was predictable when they acquired Brown from the Steelers for a third and fifth round draft pick.  Teams don’t give up the best receiver in the NFL for a couple of picks unlikely to yield a starter level player.  The Raiders thought they got a bargain.  Yeah, not so much.

The Raiders failed to live by Kent Sterling’s Rule #7 of how to build a successful department, party, or business – “Do not invite crazy into your office or home.”  Crazy people can be a hilarious distraction until they drive your car into the pool, flood your basement, hang your cat, or burn down the building, like Milton Waddams in Office Space.

There is no doubting Brown’s talent.  He is a reception machine, and has compiled insane stats over his nine-year career.  His last six seasons in many ways are the best stretch a wide receiver in NFL history.  Sadly, Brown’s superb hands and feet are attached to a head that he believes is at the very center of galaxies known and yet undiscovered.

It’s worth mentioning that the Raiders success over its nearly 60 years as an NFL franchise is at least in part due to its history of accommodating kooks and morally wayward personalities.  The Raiders motto “Just win, baby!” represents an ethos of looking the other way Monday through Saturday as long as Sundays are victorious.  Hell, they have a damn pirate in their logo.

But if you are going to welcome pirates aboard your ship, you better be ready for piracy!  Looking the other way as Brown tries to belt the GM might not instill the behavior the Raiders are looking for, but it’s the behavior they invited when they dealt for Brown.

If you embrace “Just win, baby!”, it needs to be clasped to one’s bosom all the way because pirates are either pirates or they are not.  There are no half-pirates, and there is no such thing as a half crazy Antonio Brown.

The Raiders invited Brown to their party, and now the house in on fire.  What a shock.