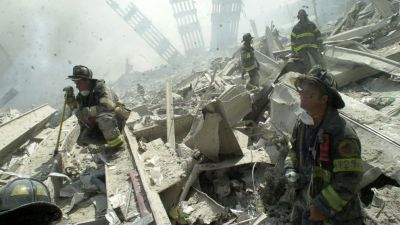 America has never been braver.

If you were alive on September 11, 2001, you remember where you were the moment you heard the first plane that hit the North Tower of the World Trade Center was a passenger jet.

Before you heard that, you assumed the plane crash involved a small private plane because no one had ever heard of a professionally piloted jet flying into one of the tallest buildings in the world.

You also remember the instant a second passenger jet hit the South Tower because it was at that instant you realized this was terrorism – not an accident involving the world’s worst pilot.

Then a few hours later, you looked into the sky and saw how odd it looks without plane contrails crisscrossing.  Maybe you saw Air Force One flanked by three F-16s as those aboard argued about whether they should return to Washington DC to reassure the nation and world.

You likely thought of the thousands of people in the twin towers during the time between the impact and collapse.  Live television showed people trapped by the fire leaping from windows to a certain death.  There was no possible response other than stunned silence or sobbing

At some point, the bravery of the “Let’s roll!” crew aboard Flight 93 was reported. They rejected the demands of the hijackers and saved hundreds of lives at the U.S. Capitol, the building into which the hijackers planned to crash.  “That’s what I would do,:” you thought.

Then you watched the first response crews tear through the rubble at Ground Zero trying to find survivors.  Volunteers poured into the area without thinking about the potential dangers – the dense residue of the collapse being inhaled and trapped in their lungs.  Years later, many would fall ill and die because of their heroism.

President Bush threw a perfect strike in baseball’s return to Yankee Stadium, and you remembered how baseball can bring us all together in the same way tragedy can.

The Who played “Won’t Get Fooled Again” at the Concert for New York City, and you blinked back tears while thinking, “You’re damn right we won’t.”  David Bowie sang “Heroes”, and there were more moist eyes.  “Damn right” again.

The Pentagon was repaired, a new tower was built, planes are now boarded without people scanning the aisles for potential terrorists, and our society continues to evolve to accommodate security measures that were unheard of prior to 9/11.

You remember, those of you who were around back then.  And we hope and pray we never experience another series of indelible moments that came like a torrent of equal parts terror, love, empathy, and valor.

Bad times bring out the best in Americans.

That’s the lasting message of 9/11 that was unintended by the cowards who turned four airplanes into passenger-filled missiles on that perfect morning 18 years ago today.