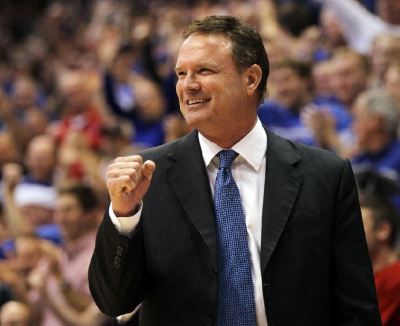 Bill Self better tighten his toupee. It’s going to be a bumpy year.

Rock, Chalk, the NCAA needs to walk the walk!!

If the NCAA doesn’t bring down a hammer on University of Kansas Basketball and coach Bill Self, the rule book should be shredded and burned.

A Notice of Allegations from the NCAA was delivered to Kansas yesterday.  Among the Level 1 charges – a lack of institutional control and head coach responsibility violations.

Text messages between former Adidas consultant T.J. Gassnola and Self were entered into evidence during Gassnola’s federal trial.  The texts from Self can be interpreted as obvious requests for Adidas to provide recruits to Kansas one way or another.

Self never straight out says, “Get $90,000 to Billy Preston’s mother and another $20,000 to Silvio DeSousa’s guardian,” but the inference can be easily made that he was at least aware of the efforts being made by Adidas to compel recruits to commit and sign with the Jayhawks.

Kansas and Self are denying everything – not a surprise.  The only big name programs to suffer major consequences for NCAA violations have been those who self-reported their violations and reduced their own programs to rubble.  Those who deny and fight have been successful in dodging bullets – or at least forcing the NCAA to alter its aim from a head shot to a flesh wound.

The NCAA has made a lot of noise over the last three years about cleaning up college basketball.  President Mark Emmert convened a committee whose sole purpose was to cleanse college hoops of rule breakers.  Well, here’s an opportunity to get serious, and set things straight.

Any tool can bring do-gooders to Indianapolis for meetings, but the man or woman who begins the real process of demanding compliance in college basketball will have to successfully take on a big time coach at a big time program to send a clear message.

That coach is Bill Self and the program is Kansas.

The real question is not whether Emmert wants to clean up college hoops.  It’s whether university presidents who represent NCAA member institutions are willing to temporarily diminish the popularity of the game by making an honest effort to enforce rules that few outside of Indianapolis believe in.

Is bringing meaningful consequences for those who ignore NCAA rules worth destroying programs that violate them?  That’s the question.

The answer to that question will determine what happens to Kansas and Self, as well as Arizona and its coach Sean Miller and others named during testimony during the trials that saw multiple shoe guys convicted.

If NCAA membership has the stomach to demand member programs follow the rules, Self will get the head shot – a one-year suspension or a show cause order.  If not, he skates with a flesh wound – a nine-game suspension and the loss of a couple of scholarships for a year or two.

At the very minimum, fans and media will find out once and for all whether the NCAA’s membership is truly committed to respecting its own rules.  If they don’t hammer Self and Kansas, I’m done fretting about the punishment of wrongdoers.

Even if the NCAA doesn’t have the stones to either take its own rules seriously or change them to reflect reality, I’m going to wash my hands of them and simply watch kids play with the understanding that some programs buy players – and that greed governs college basketball.