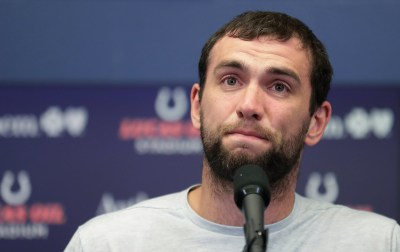 One month after his retirement, neither Andrew Luck nor Indianapolis weeps.

It seems like it’s been so much longer than that.  Out of sight, out of mind, I guess.

What Luck has been doing is anyone’s guess.  I’m not sure anyone has asked.  Is he in Indy, or visiting Amsterdam?  Maybe he’s gone to Nepal to receive counsel from the Dalai Lama.  He might have enrolled in course at his beloved Stanford.  Who knows?  It doesn’t really matter, does it?

It’s not that fans suddenly decided they don’t care about Luck as a person.  It’s that they never cared about what Luck was doing if it didn’t affect his ability to help the Colts win.

Stevie Nicks says it well in Dreams, “Thunder only happens when it’s raining,
Players only love you when they’re playing.”  Andrew Luck loved fans when he was thundering down the field.  Off the field, he coveted privacy and quiet.  Fans felt likewise.

The rain that came with the announcement of his retirement cleared very quickly.

That’s the cruel truth of the NFL, NBA, MLB, MLS, and NHL.  Fans love the players when they are playing (and winning).  When players are done, they are shuffled out of our minds just as teams shuffle them off the roster.

Jacoby Brissett is the quarterback for the Colts, and fans have been pleased with his play during his first three games.  He hasn’t authored any signature comebacks, but he also hasn’t put the Colts in a position where he needed to.

Some are asking whether the Colts are better off with Brissett than they would have been with Luck.  That’s a media question that has no answer.  What is known is this: the Colts are 2-1, and Brissett has thrown only one interception.

We’ll never know what this Colts team might have been with Luck instead of Brissett, and no one in Indianapolis cares much about that as they cheer for a team that appears still to be as good as anyone in the AFC South.

Luck moved on.  And just a month later, so has Indianapolis.