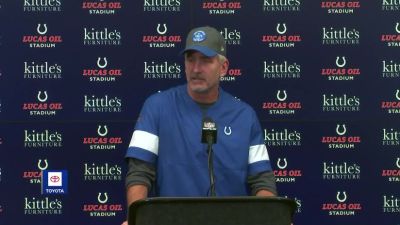 Colts coach Frank Reich had a choice.  Behind by seven with 1:10 left, should he try the onside kick or pound it deep?

With all three timeouts left, if the Colts kicked deep and the defense could keep the Raiders from earning a first down they would get the ball back with 45-seconds left.

Or Reich could roll the dice on an onside kick.

Prior to the kick, the Raiders had 10 offensive possessions.  Four (40%) ended with a punt after not earning a first down.  Over the course of the four-game season, the Colts defense has created eight three-and-outs in 36 drives.  That’s a 22.2% success rate.

The success rate for onside kicks being recovered by the kicking team in 2018 – after the rules were changed to reduce collisions – was 7.5% (4-for-53).

Those numbers would lead a reasonable person to surmise there is a much better chance of forcing the Raiders to punt than recovering an onside kick.  In fact, that likelihood is three times greater.

Reich agreed, “The percentages on onside kicks are so stinking low.  With three timeouts, the fact that we needed a touchdown – we thought we could kick it. If you kick the perfect kick then you maybe pin them inside the 15, and then go three-and-out and have decent field position. That’s what went into it,”

In hindsight, the Colts were unable to stop the Raiders so the decision is being criticized.  In the moment, an onside kick would have been an irresponsible choice.

Reich is developing a reputation for putting the game in the hands of his players.  Execute, win.  His Colts are not about trickery and scheming to overcome his players.

His strategies are designed to showcase his roster, not prevail despite it.

As flawed as the the Colts defense was yesterday without Darius Leonard and Malik Hooker, an onside kick was not justifiable in the moment, and so it remains after the fact.