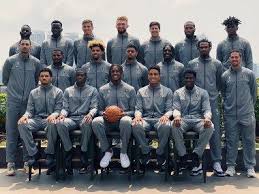 Gray is the perfect color for this roster as they were photographed in Mumbai. There are no stars, no outrageous personalities, and no outsized egos.

Kevin Pritchard can’t run the Pacers basketball operation in the same way as the other 29 guys with his job and win a championship.

Many of the other teams can lure Uber-talented free agents with bright lights, branding opportunities, and championship dreams.  The Pacers are a small market team without a single NBA title in its 43 seasons.  Pritchard’s phone doesn’t ring when free agency opens like the phones in Los Angeles, the Bay Area, Boston, and New York.

There has been a lot of good basketball over the last 30 seasons for the Pacers – 24 trips to the playoffs, eight Eastern Conference Finals appearances, and one lone visit to the Finals against the Lakers in 2000.  But no banners – nothing great.

That good basketball has worked against the Pacers as the last time they had a draft pick in the top nine was 1989.

Without being in the game for free agents and top draft picks, the Pacers need to find a way to excel without excellent players.

Pritchard has to reinvent roster construction for the Pacers to get to the mountaintop, and the recipe he landed on is combine the right good players to create great results.  Getting that done requires puzzle pieces that enhance the level of play for the others.  He needs team-first assets who are more basketball players than brand owners.

Basketball is a game that rewards generosity and tempts selfishness.  Great players like LeBron James can win championships occasionally with me-first basketball.  Good players cannot afford to indulge.  They need to be a tight five-man jazz combo – playing for one another – to be able to win big.

Pritchard has loaded the Pacers with good, not great.  Newcomers Malcolm Brodgon, T.J. Warren, T.J. McConnell, Goga Bitadze, Jeremy Lamb, and Justin Holiday are good, and the best part is that they know they are good, not great.  Holdovers Domas Sabonis, Myles Turner, and Doug McDermott are high end role players as well.

The wild card in the deck in Victor Oladipo, who is recuperating from a surgically repaired quad tendon tear.  He is a very good player who has a tendency toward branding.  If he can compete as part of the team rather than asserting himself as the “star,” Pritchard’s vision can become reality.  If Oladipo wanders into the behavior that defined Paul George’s last two seasons with the Pacers, he will ruin this tasty gumbo of star-less basketball.

The NBA is full of players who are good but believe greatness is within their grasp.  Teams with these guys will always lose because they are out to prove themselves worthy rather than win.  Pritchard has rejected these self-important mercenaries as unworthy of his bold experiment.

Indiana is the perfect place for an NBA franchise to embrace we-first basketball.  This state appreciates sharing the ball and defending as a team at a level beyond the comprehension of most cities with a franchise.  The NBA is a star-driven league, and fans love the stars – just not quite as much here.

The Pacers cannot succeed unless the whole is greater than the sum of their parts.  That requires a selfless commitment to one another at every level of the organization, and that is what Pritchard is building.

We’ll see if it works.