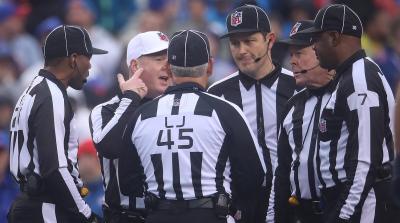 Too many flags, reviews and midfield meetings – the fix is easy but counter to current logic.

Here’s what happens when an employee every decision is second guessed – he or she works to be perfect, and perfect doesn’t exist.

That’s part of the reason officiating in the NFL continues to erode.  Replay expands to pass interference calls, and all of a sudden flags fly all over the field.  Penalties are being called 16% more this season than in any in the previous NFL season.

The logic behind replay is that technology exists to correct obvious misses, and what’s wrong with that?  Makes sense for the NFL – or any other league – to get calls as right as they can be.  But the unintended consequence is that refs strive for perfection rather than fairness.  Officiating is best when it is fair.

The reason perfect doesn’t exist in sports officiating is that many rules are not black and white.  Pass interference rules have a lot of gray areas, and so does the catch rule.  In basketball, the block/charge calls are rarely cut and dried.

In large part – fans, coaches, and players are responsible for the terrible officiating in the NFL because our society has become mistake averse at a ridiculous level.  Because we can’t allow for an occasional blown call, replay is expanded and referees are vilified bad flag.  The refs as a response question themselves and become less competent.

If we want football refs to improve, eliminate replay.  If we want clarity in block/charge calls, eliminate the charge foul.  If we want a reduction in penalties, the refs need to be empowered to call the game as they see fit.

Desperate times call for desperate measures, and these are desperate times.  Bad officiating is threatening to ruin the enjoyment of playing and watching football.  Eliminating replay and empowering the flawed human beings who officiate may seem counter-intuitive as a solution for better officiating, but that would be the result.