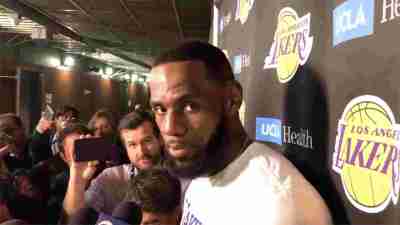 LeBron angry about human rights getting in the way of his fun in China.

“I don’t want to get into a word or sentence feud with Daryl Morey, but I believe he wasn’t educated on the situation at hand, and he spoke. And so many people could have been harmed not only financially, physically, emotionally, spiritually. So just be careful what we tweet and say and what we do, even though, yes, we do have freedom of speech, but there can be a lot of negative that comes with that, too.”  LeBron James with a very pragmatic comment yesterday.

Being careful about voicing our beliefs is not mentioned in the First Amendment of the U.S. Consititution.

The First Amendment reads, “Congress shall make no law respecting an establishment of religion, or prohibiting the free exercise thereof; or abridging the freedom of speech, or of the press; or the right of the people peaceably to assemble, and to petition the Government for a redress of grievances.”

It does not say, “Congress shall make no law respecting an establishment of religion as long as the state and LeBron agree with it, or prohibiting the free exercise thereof; or abridging the freedom of speech unless LeBron happens to be in the country about which you are talking, or of the press; or the right of the people peaceably to assemble in a place and time that does not inconvenience LeBron, and to petition the Government for a redress of grievances.”

James was talking about a since deleted tweet from Houston general manager Daryl Morey, “Fight for Freedom, Stand with Hong Kong.”  Protests in Hong Kong continue against a piece of legislation that would allow extradition of criminal suspects to China where they would stand trial.  The bill is dead, but the protests continue.

So it’s Morey’s fault that China is a totalitarian state that demands strict adherence to its demand of support and obedience?

LeBron’s trip to China was less fun than it should have been, so Morey was wrong?  Swallowing American beliefs is the price of doing business with China, I guess.  Beliefs are great for LeBron until they get in the way of cash.

I’m no fan of kneeling during the National Anthem, but Colin Kaepernick voicing his concerns for African-Americans being mistreated by police is in principle more American that LeBron kowtowing to the Chinese in an effort to not offend them – or their cash.