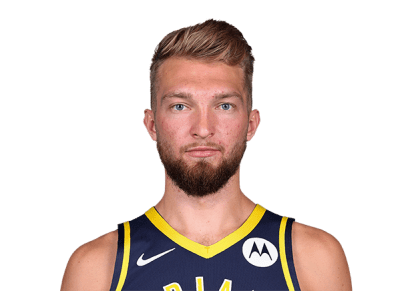 Domas can pick up a check now that he’s earning similar cash to Victor Oladipo and Myles Turner.

The Pacers and Domas Sabonis have agreed to a four-year contract extension worth $74.9-million, according to reports.  With bonuses, Sabonis could earn up to $85-million.

There were rumors over the weekend that Sabonis might be dealt prior to today’s 6 p.m. deadline for the extension.  That trade never materialized, and now the Pacers roster is set for the time being – and that time might extend through next season as 11 players are signed through 2020-2021.

Questions persist about how both Sabonis and Myles Turner can play at the same time.  Sabonis will have to defend the opponent’s starting four, and there is no question he is more comfortable defending the five.

From an offensive perspective, Sabonis is a very energetic and adept option as part of the Pacers pick and roll as well as with his back to the basket on the block.

The Pacers are picked by experts to win anywhere from 42-to-48 games, but people internally are more optimistic.

Victor Oladipo is still working to come back from the surgery to repair his quad tendon.  Regardless of when he returns, the Pacers has a good chance to improve upon the 48 wins they posted during each of the past two seasons.

With Oladipo at the two, Malcolm Brogdon at the point, T.J. Warren at the three, and Sabonis and Turner as bigs, the Pacers will have a banned attack they should be able to score with anyone.

Sabonis and his teammates will open the season against Detroit Wednesday night at Bankers Life Fieldhouse.