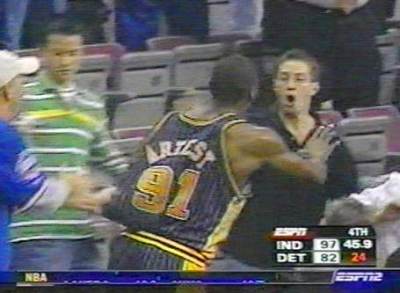 The look on the fan’s face says it all. He wants no part of Ron Artest. Doubt he’s said a word to anyone since that night in 2004.

There is one consequence that ensures an idiot will keep his mouth shut in a situation where he might otherwise spew racial epithets and profanity – the threat he will get his ass kicked.

In major league sports, the last time I can remember a player going into the stands to issue a physical counter-measure against a fan was The Brawl.  Members of the Indiana Pacers answered fearless ignorance from fans with a little idiocy of their own.

This problem is not unique to the NBA, but because of the proximity to players and a lack of a physical barrier between participants and fans, it’s the league where it can become most dangerous.

Since The Brawl, basketball fans have been emboldened by the NBA’s insistence that players accommodate loud mouths rather than confront them.  The predictable result has been that fans have become louder and more foolish.

The NBA is trying to curb fan misbehavior by enacting a zero tolerance policy that mandates fans who get personal, profane, sexual, and/or racial are disciplined through a variety of potential punishments – including being banned from arenas.

What the NBA should do is relax the penalties for players who answer the n-word with a shot the the jaw of the perpetrator.  If the NBA wants quiet, a smack will bring silence.  Maybe it’s time to bring Artest back to the NBA as the director of fan discipline.

Back in the day, the threat of violence was enough to keep fans civil.  In the 1980s at a game between the Lakers and Pacers at Market Square Arena, a fan heckled Magic Johnson in the same way the NBA is trying to prevent.  During a stoppage in play, Magic glared at the loudmouth fan and said, “Hey m*****f****r, you want to say that to my face, come find me after the game!”

The fan shut his mouth, and so did everyone else who sat in that section.  The threat of violence communicated without Magic’s trademark smile was enough.

No one is advocating brawls between fans and players, but the threat of one is a better counter-measure than being banned from an arena.  Wanton violence against fans in NBA arenas where loudmouths assault players would be rare.  It likely wouldn’t take more than one punch per year to compel compliance among morons.

That’s what happened after the Malice at the Palace.  As soon as Ron Artest went into the stands to seek and destroy the buffoon who threw ice at him as he lay on the scorer’s table, fan behavior straightened up for a quite a while.

The fear of being dropped by a huge and angry professional athlete drove an evolution to courtesy and decency.

If the NBA truly wants recklessly verbal fans to be dissuaded from barking at players, lessen the penalty for physical responses from players.  Instead of the season-long suspension Artest received for his role in the Brawl, ding a guy $5,000.  Knowing that five grand is tip money for players would likely quiet all but the dumbest fans.

The NBA’s zero tolerance policy for fan misbehavior assumes fans will listen to reason, but idiots who shout the n-word in a crowded arena are not reasonable.

The potential for a swift and severe disincentive will get the job done.