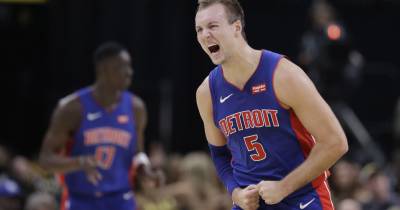 Luke Kennard scored a career high 30 while Edmond Sumner’s +/- was -23. Those two stats are related.

Thinking the Pacers would merge painlessly into a new era after debuting four new starters in last night’s season opener was foolish.

I drank the Kool-Aid too.

Thad Young, Darren Collison, and Bojan Bogdanovic have been replaced by upgrades, or so we thought.  Over time, maybe that will be true.  Last night, it wasn’t as the Pistons embarrassed the Pacers in the last six minutes to win 119-110.

The flaws were obvious as Andre Drummond scored 32 points and grabbed 23 boards – seven on the offensive end.  Luke Kennard buried six of nine three-pointers toward a career high 30 points.  Derrick Rose crawled from his career grave to score 18 and drop nine dimes – many to Kennard.

The moral of the story was that the Pacers didn’t defend and had trouble scoring late.  That’s a terrible combination for a team with designs on home court advantage during the first round of the playoffs.

Victor Oladipo’s return is a reason for hope, but Oladipo at his pre-injury best won’t help the Pacers defend the post.  Was the problem Myles Turner, Domas Sabonis or both?  Did Kennard get crazy hot, or was Edmond Sumner just that bad a defender?  (The correct answer is both.)

Issues exist internally as well.  Aaron Holiday came off the bench in the first half for seven miserable minutes.  He missed all six shots, committed two fouls, and turned the ball over once.

Project Holiday’s performance for 35 minutes (a preposterous notion) and he goes 0-30 with 10 fouls and five turnovers.  Holiday needs to understand his role is to be a place holder and not the best player on the floor, or he’ll spend a lot of time sitting – as he did during the entire second half.

Jeremy Lamb looked a little lost starting at the two, but that might be a temporary condition.  It’s not easy being a new guy, but it’s especially tough being a new guy among a bunch of other new guys.  Malcolm Brogdon, T.J. Warren and Lamb have never played together – or with Sabonis and Turner.  Lamb needs to get comfortable quick because there is no Plan B at the two.

Oladipo’s return would help in two ways – he is a big upgrade over Jeremy Lamb, and Lamb would be a huge upgrade over Sumner.

Until then, the Pacers are going to have to figure out how Turner and/or Sabonis can stop talented bigs, hope twos are cold as Sumner tries to figure out how to defend a shooter, and find an option capable of scoring late in close games.

If they can’t do those three things, the wait for Oladipo won’t be much fun.

The hole the Pacers dig will be tough to climb out of.

If you’re a masochistic Pacers fan, take a look at the Luke Kennard highlight reel from last night, and watch how Sumner (#5) defends him.  Doug McDermott wasn’t much help either.