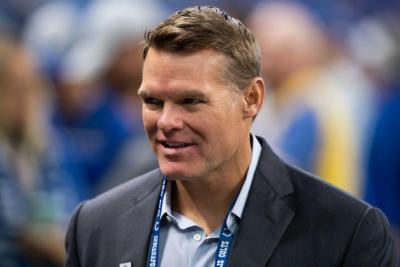 Colts GM Chris Ballard did nothing today, and that was the prudent play.

The Indianapolis Colts are not about winning news cycles and making headlines.  Under GM Chris Ballard, the ship steadily heads toward prosperous waters without jerking the wheel toward choppy seas.

Trade deadline day is a day where the waves crest higher than usual.

So while other teams moved players for draft picks and others overpaid for that one guy that might put them over the top, the Colts stayed quiet.

If the phone rang, it was answered.  But the Colts don’t show up for work on a day like this trying to earn mentions on ESPN’s tedious NFL Trade Deadline special.  Chris Mortensen and Adam Schefter treat the Colts like a CFL franchise on a day like this, and that’s just fine with Ballard.

So four o’clock came and went without a whisper from West 56th Street.

Hell, the Colts are 5-2 after their franchise quarterback retired 15 days before the season opener.  Seems like Ballard is about preparing his team so deals on days like this don’t have to be made.

What holes do the Colts need to plug with a Hail Mary deal anyway?

They could use a #2 wide receiver, but have Devin Funchess coming off the injured list.  They need to put more pressure of the quarterback, but have Justin Houston and Ben Banogu improving every week.  They’ve had a hole at free safety, but just got Malik Hooker healthy.

Plugs are coming from within, which is the way Ballard likes it.

The only trade I thought Ballard might pull the trigger on was to sell off a player or two for draft picks, but how much sense would that make for a team leading its division?  He loves draft picks, but not at the expense of a roster that appears headed for the playoffs.

Like Norman Dale in Hoosiers, Chris Ballard’s team is on the floor – or field.